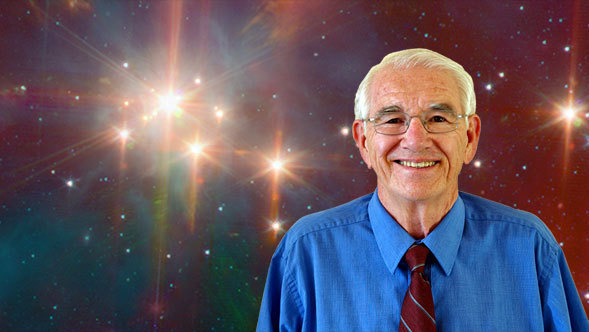 On June 11th, Dr. Frank Low, one of the people responsible for the rise of infrared astronomy, died in Tucson. He was 75 years old.

Dr. Low was also intimately involved with the Spitzer Space Telescope, not only by making discoveries that made the design of Spitzer possible, but also as the Facility Scientist of the Spitzer mission.

He began his career in the early 1960's at Texas Instruments, after having studied physics at Yale and Rice Universities. At T.I., he invented an extremely sensitive device that measured minute changes in temperature. This device, made of the element germanium, mixed with small amounts of gallium, would register changes of temperature by changing its electrical resistance. (Such a device is called a "bolometer".) This device, Low realized, could be used to detect infrared radiation, and thus revolutionized the practice of peering into space to look for stars and galaxies in infrared wavelengths.

In 1962, Low moved from Texas Instruments to the National Radio Astronomy Observatory, in Green Bank, West Virginia. There, he tested his bolometer by pairing it with a radio telescope. Then, in 1965, he moved to the University of Arizona, where he taught for almost thirty years. He also founded a company, Infrared Laboratories Inc., which would later supply parts to NASA missions and to other astronomers pioneering the field of infrared astronomy.

But Low not only dramatically improved the instruments that astronomers used to look at stars. He also improved the way in which they were used.

The Earth's atmosphere is a problem for infrared astronomers. The water vapor and other gasses absorb infrared radiation, reducing the amount collected by telescopes on the ground. So, astronomers usually try to put their scopes in the highest and driest places on the planet, to reduce not only the amount of gas between their instruments and the starlight, but also to reduce the amount of water vapor in the air.

This new approach produced immediate results. Using the Learjet scope, Low discovered that both Jupiter and Saturn â€” the two largest gas giant planets in our solar system â€” were emitting more energy than they were absorbing from the Sun. Therefore, Low concluded, they both must have an internal source of heat.

Going further, Dr. Low and others began pressuring NASA to build an infrared telescope that would be put into space. This new instrument, the Infrared Astronomy Satellite (IRAS), was launched in 1983, and was a joint venture of the United States, the United Kingdom and the Netherlands.

IRAS found more than 500,000 sources of infrared radiation in space, including interstellar clouds, stars, and galaxies. IRAS also found dust and debris around other stars, suggesting that the planets might be forming, or might have formed, around other stars besides our Sun.

Rather than placing the telescope in a heavy, insulating vacuum vessel that would keep the telescope cool during launch, Low proposed that the telescope be launched warm and uninsulated, and left to cool off in the depths of outer space. (Usually, infrared telescopes must be cooled, so their own infrared radiation does not interfere with their measurements.) This insight allowed the project to continue, and initiated a new way of building and launching infrared telescope satellites, paving the way for the upcoming James Webb Telescope, a huge 6.5-meter infrared telescope scheduled for launch in 2014.

Erick Young, an astronomer who worked with Frank Low at the University of Arizona, says that Low had a "major impact" on his career.

"He taught me the importance of instrumentation and detectors to the field," Young says, "and that's been my direction ever since his influence."

Young also claims that Low "had a remarkable ability to see 'obvious' things that had been missed by others."

Says Young, "This intuitive ability also carried over to technical solutions. He had a knack for coming up with elegant solutions to difficult problems."

Low is survived by his wife, two daughters, a son, a sister, and six grandchildren.