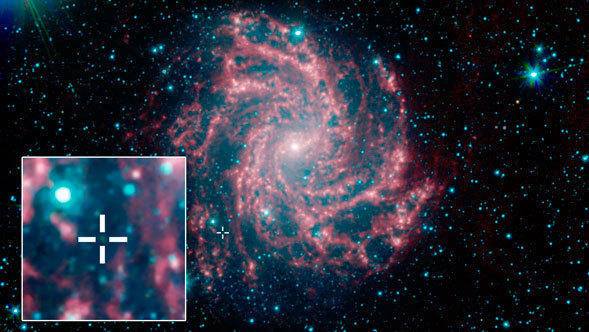 When amateur astronomer Ron Arbour spotted an enormous explosion from 17 million light-years away in the Fireworks Galaxy (NGC 6946), many professional scientists believed that it was the final death throes of a massive dying star. However, observations from NASA's Spitzer Space Telescope unexpectedly showed that a relatively lightweight star was the source of this spectacular blast.

"This finding was quite a surprise -- the exploding star was only about 10 times the mass of our Sun. Typically, we see this kind of outburst from stars that are at least 30 times more massive than our Sun," says Jose Prieto, a graduate student at Ohio State University in Columbus, Ohio, who searched for the source of the blast in archive data taken by professional optical and infrared telescopes.

Now astronomers are wondering, did this star really go supernova? Or is it an impostor? Either way, they hope this finding will provide some insights into how a relatively small star could cause such huge explosion.

When astronomers see a bright flash of light indicating a possible nearby supernova, their first instinct is to find the star before it died, or progenitor, in archived visible-light observations of the region. But when Prieto and collaborators from Ohio State searched for the source of the NGC 6946 flash in optical observations previously taken by the Large Binocular Telescope Observatory (LBT) in Arizona, they found nothing.

"If this was indeed a core-collapse supernova, we should have seen a progenitor in the optical observations, since the LBT observations were very deep," says Prieto.

Out of curiosity, he also sifted through archived infrared observations of the galaxy that Spitzer had taken three years before, and it was there that Prieto discovered the source of the flash.

"The original star could only be seen at three infrared wavelengths of 4.5, 5.8 and 8.0 microns, this clearly indicates the presence of warm dust around the star, probably dust formed in the wind flowing off the star," says Prieto. "This is the first time a progenitor has only been spotted in Spitzer images."

This dust explains how the progenitor eluded the LBT's prying eyes -- the blanket of dust actually absorbed almost all of the star's optical and ultraviolet light. However, because the dust re-radiates the absorbed starlight in the infrared, Spitzer could locate the star. He notes that the total infrared brightness of the star indicates that it was only 10 times more massive than our Sun.

According to Prieto, the initial optical observations of the blast suggest that the event was possibly a type IIn supernova. Like celestial chemical factories, stars spend most of their lives fusing hydrogen atoms in their core. The energy produced by this fusion causes an outward pressure that counters the force of gravity. When the hydrogen runs out, the outward pressure ceases and the core begins to shrink. This causes the star's density and temperature to increase, igniting further fusion of heavier chemical elements in its core.

For stars with several times the mass of our Sun, this process occurs again and again until the core turns to iron. At this point the core collapses on itself at about 70,000 kilometers per second, smashing everything together into a super-dense mass. Protons and electrons merge into neutrons, producing a shock wave of neutrinos. This is called a core collapse, identified by scientists as a supernova of type II.

Type IIn supernovae are a subclass of core-collapse events that show an abundant amount of hydrogen associated with a dense gas cloud surrounding the star before the explosion, probably created by a strong wind.

"Either way, the result is interesting because astronomers currently think that type IIn supernovae and luminous blue variables are associated with very massive stars - tens of solar masses - and not with the smaller 10 solar mass star we found with Spitzer. This is a very unusual case, and more work definitely needs to be done to figure out exactly what happened here," says Prieto.

Shortly after Prieto's paper was accepted, a similar bright outburst was spotted in the nearby galaxy NGC 300. Again, researchers did not see anything when they scoured optical archives for the source of the explosion. However, when they turned to archived Spitzer observations team members were able to identify a dust-obscured star as the progenitor, similar to the progenitor of the NGC 6946 outburst.

"These two luminous outbursts may be a new class of violent explosions in dusty massive stars," says Prieto, whose paper on SN 2008S's progenitor will be published in the July 1st issue of the Astrophysical Journal Letters.