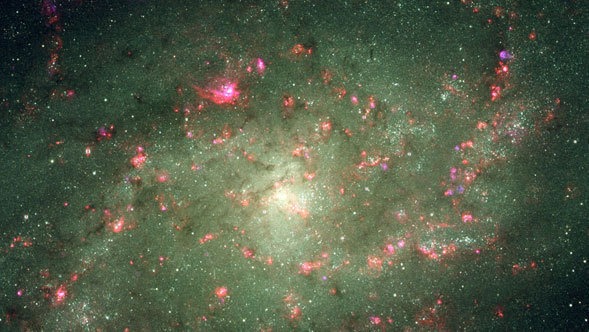 On Earth, neon is known for being flashy. Any Las Vegas tourist knows that signs sporting this noble gas are hard to miss, but in space this is not always true. Neon is the fifth most abundant element in the cosmos, but until recently, astronomers couldn't seem to get a precise measurement of it in the Universe.

"By the good fortune of excellent instrument planning, Spitzer's infrared spectrometer instrument can measure all the dominant forms of neon in star-forming regions, at the exact same time and area," says Dr. Robert Rubin, of the NASA Ames Research Center in Moffett Field, Calif.

Rubin and his collaborators used Spitzer's spectrometer to measure neon and sulfur abundances in 25 star-forming regions across the nearby spiral galaxy M33. For the first time, they found that the ratio of neon to sulfur in all of these areas is relatively constant at about 16. They note that this observational result is not surprising because it is consistent with current models for how these chemical elements are created in the cosmos.

"Both neon and sulfur are produced in nuclear reactions deep inside the core of the most massive stars following the stages where carbon and oxygen are synthesized by nuclear processes in these stars. Theory predicts that neon and sulfur yields depend very little on how enriched in the 'heavy elements' -- all chemical elements except hydrogen and helium -- that the star begins its life with. Thus, it is expected that the neon to sulfur ratio remains relatively constant throughout a galaxy," says Rubin.

Team members believe that this research may eventually provide valuable insights into the amount of neon in our Sun, which is currently a controversial topic among astronomers.

Because cosmic neon can take on a variety of "forms" in a given region of space, astronomers must account for all of its possibilities to get an accurate measurement of it. The neon atom contains 10 electrons, and an energetic environment can rip one or multiple electrons off. This altered atom is called ionized neon.

According to Rubin, neon atoms in star-forming regions exist primarily in two states -- singly and doubly ionized neon, meaning that it is missing one and two electrons, respectively. While prior infrared missions could only detect one form of neon at a time in any given area, Spitzer can see all the dominant forms at the same exact time. This makes Spitzer's measurements more precise. The telescope's unique sensitivity also allows it to measure this ratio for very distant objects.

"In addition to neon, Spitzer's infrared spectrometer can do nearly as well to measure the sulfur abundance for star-forming regions at the same time and location... Spitzer is a lean, mean neon and sulfur abundance machine," says Rubin. Sulfur is the eighth most abundant element in the cosmos.

By taking accurate measurements of both neon and sulfur in a star-forming region, astronomers can then create an abundance ratio, which helps them keep everything in perspective.

"The rationale behind ratios is to take away the variability due to other effects such as distance. If we looked at nearby star-forming regions everything would look brighter, not because there is more neon and sulfur, but because it is closer. By putting neon in a ratio with sulfur, we normalize this measurement and put everything on the same level," says Rubin.

Team members chose to compare neon to sulfur because Spitzer was able to measure all the dominant forms of these elements at the same time, in the same area.

Rubin and his collaborators will continue their research with Spitzer in the next few months by observing nearly two dozen star-forming regions in the nearby galaxy NGC 6822. A paper on the M33 research findings will be in a forthcoming issue of the Monthly Notices of the Royal Astronomical Society.

Other authors on the paper include Janet Simpson, Sean Colgan, Ian McNabb, Edwin Erickson, Michael Haas, and Robert Citron, of the NASA Ames Research Center. Reginald Dufour and Gregory Brunner, of Rice University. Adalbert Pauldrach, of the University of Munich.