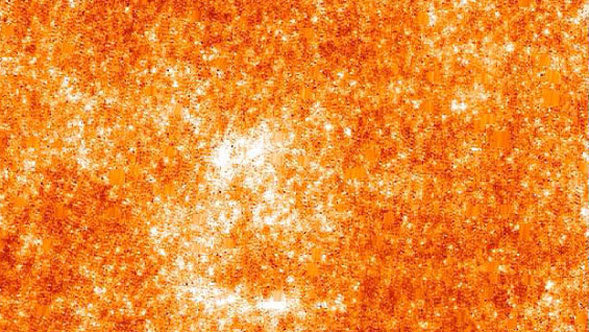 Dusty infrared galaxies are cosmic "nurseries" for some of the universe's hottest young stars -- and new research from NASA's Spitzer Space Telescope shows that when the universe was approximately six billion years old, these galaxies packed into the densest "zip codes" in space. Astronomers hope that this latest finding will give them insights into why the modern universe looks the way it does.
"Today, getting information on the clustering of infrared galaxies is essential to understanding their formation process, and to see how they relate to other galaxy populations. Up to now, very little information is available on the clustering of infrared galaxies," says Dr. Guilaine Lagache of the Institut d'Astrophysique Spatiale (IAS), Paris, France.

Nowadays, infrared galaxies are still hotbeds for stellar birth. However, they no longer reside in crowded galactic "metropolises." Instead, they prefer spacious galactic "suburbia" -- or the sparsely populated outskirts of galaxy clusters.

Most of the galaxies we see in the night sky shine brightest in visible-light, which the human eye can detect. Unlike these structures, infrared-bright galaxies are extremely dusty and emit more than 90 percent of their energy in the infrared. Although humans cannot see infrared light, we know it as "heat."

The thick dust clouds that permeate infrared galaxies block most of its visible starlight from reaching Earth. Furthermore, Earth's atmosphere prevents their infrared light from hitting the ground and so for most ground-based telescopes, infrared galaxies are practically invisible, or appear very "dull." Yet, heat-sensitive space-based infrared telescopes like Spitzer can see that these structures are "fascinating" stellar incubators.

"Infrared telescopes are crucial for studying distant galaxies, they show where all the star formation is going on," says Lagache.

Galaxies in the Infrared Haze

Space is like a time machine -- the farther away an object is, the farther back in time astronomers peer to capture a glimpse of it. The galaxies in Lagache's study are located more than seven billion light years away, meaning that light from these objects traveled for more than seven billion years to reach Earth. Astronomers believe that our universe is 13.7 billion years old.

Until now, it has been difficult to clearly resolve individual galaxies or even galaxy clusters at this distance in the far-infrared. However, scientists can infer the characteristics of these galaxies from the haze of infrared light that permeates the universe -- which astronomers call the Cosmic Infrared Background. This background glow comes from dust warmed by all the young stars that have existed since the beginning of time.

Like sitting in a noisy room and trying to make out a single conversation from the background noise, Lagache used Spitzer's unique infrared range to identify patterns in the Cosmic Infrared Background, which come from dusty distant infrared galaxies that are actively forming stars.

"Our work reveals for the first time some structure in the Cosmic far-Infrared Background," says Lagache. "It is essential to understand these fluctuations because this information may help us understand how visible matter and dark matter in the modern universe is related."

Dark matter is one of modern astronomy's greatest mysteries. Although astronomers cannot see dark matter, they know that it exists by the way its gravity manipulates light.

The more mass an object has, the more gravity it wields. Gravity is the "glue" that binds galaxies and galaxy clusters together. From observations, astronomers know that galaxy clusters do not contain enough visible mass to hold together. Thus, they conclude that there must be more to a galaxy than meets the eye. They refer to this invisible mass as "dark matter."

"We have waited a long time for this discovery, and Spitzer is the only telescope with the sensitivity to see this. With the future Herschel and Planck satellites, we will be able to push these observations to longer wavelengths and go back even further into the history of our universe," says Lagache.

Lagache's paper on the topic was published in the August 2007 issue of the Astrophysical Journal.