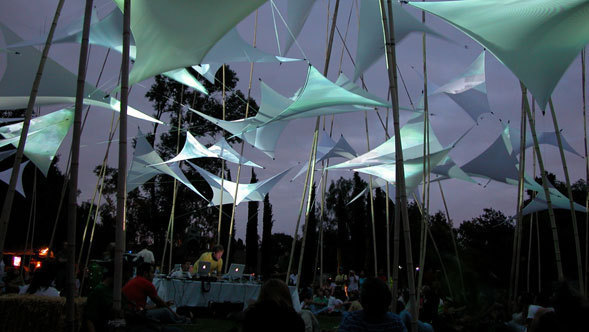 Transport to a universe of ever-changing sights, sounds, and spaces at the Los Angeles County Arboretum's second annual "Terrabyte" event on August 26, 2007 from 5 to 10 PM PDT.

"Terra" as in the planet Earth, and "byte" describing a unit of storage in computers -- Terrabyte is a unique celebration of nature, technology, and art.

Begin your voyage in space with a dazzling display of cosmic images from NASA's Spitzer Space Telescope. Learn about our infrared universe from professional astronomers, and discover other planets with the Discovery Dome planetarium show "Fantasy Worlds."

Then, travel back to earth for an evening immersed in the realm of human creativity, featuring experimental musical performances and interactive emerging technology. Visitors can also trek through the Spiny Forest of Madagascar and explore other continents with the Arboretum's "garden treks" led by Arboretum tour guides.

After sunset, guests will end their adventure on a bail of hay under the "Ecoscab" -- a 30-foot structural composition of bamboo and fabric designed on site. A spectacular show of music and visuals will be projected on the structure after sunset.

Cash bar and food will be available. There is a $10 suggested donation for this event. Proceeds will go to support The Arboretum's Plant Conservation Fund. The Arboretum is located at 301 N. Baldwin Avenue, Arcadia, Calif. 91007.