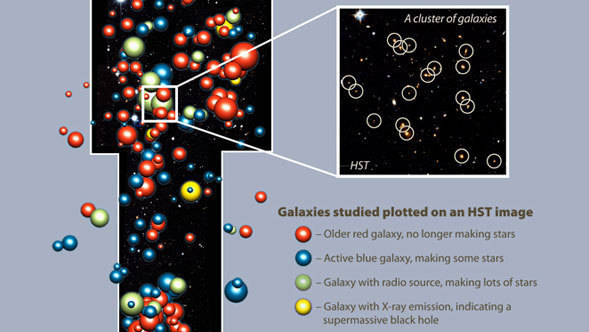 Large galaxy clusters are the universe's metropolises, and for years many astronomers have focused their attention on the crowded "downtowns." However, a new map of some of the largest ancient galactic cities shows that much of the "action" is happening in the cosmic suburbs.

An announcement on this result will be made today (May 28) at the 210th meeting of the American Astronomical Society, in Honolulu, Hawaii. Drs. Gordon Squires, Mark Lacy, and Jason Surace of the Spitzer Science Center, Pasadena, Calif. are co-investigators on the project.

"The most interesting thing that we've found so far is the incredible amount of activity occurring in galactic suburbia," says Dr. Lori Lubin, of the University of California at Davis, who is the principal investigator of the Observations of Redshift Evolution in Large Scale Environments (ORELSE) Survey. "We see unusually large numbers of galaxies with high star formation rates, producing over 100 new suns per year, and with active central supermassive black holes."

ORELSE is one of the first comprehensive surveys of large-scale environments around very massive galaxy clusters between 6 and 9 billion light-years away. In this study, Lubin and her collaborators hope to gain insights into physical properties that affect galaxies in the cluster outskirts and understand the interactions that leave them forever changed.

In the past, telescope limitations forced astronomers to focus their studies on either the centers of large clusters or random regions in the cosmic web. Now, with the latest ground-based and space-based telescopes, scientists are able to map larger areas.

"Our research is like mapping the whole Big Island of Hawaii instead of just Hilo," says Dr. Roy Gal of the University of Hawaii at Manoa, who is co-investigator of the study. "We have already discovered the largest known supercluster -- cluster of clusters -- present when the universe was half its current age."

To see what is happening in the cluster suburbs, the team collected data with nine different telescopes, including the 10-meter Keck I and II telescopes, 8-meter Subaru and the 4-meter United Kingdom infrared telescopes on Mauna Kea, Hawaii; the 5-meter Palomar telescope in California; the 4-meter Kitt Peak telescope in Arizona; and the Very Large Array in New Mexico. For space-based observations, the team used three of NASA's Great Observatories: the Spitzer and Hubble space telescopes, and the Chandra X-ray Observatory.

"The Spitzer observations interest me. With Spitzer, we expect to discover even more galaxies containing voracious black holes. They may be hidden behind thick curtains of dust, but Spitzer will find them," says Squires.

Team members also note that this study may provide valuable clues about our Milky Way galaxy's future. They say that our Milky Way is currently sitting in galactic suburbia and that our nearest cosmic metropolis is the Virgo Cluster of galaxies, located approximately 100 million light-years away.