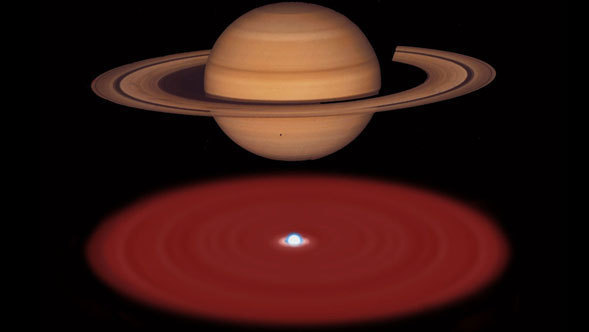 For the last two years, astronomers have suspected that a nearby white dwarf star called GD 362 was "snacking" on a shredded asteroid. Now, an analysis of chemical "crumbs" in the star's atmosphere conducted by NASA's Spitzer Space Telescope has confirmed this suspicion.

"This is a really fascinating system, that could offer clues to what our solar system may look like in approximately five billion years when our Sun becomes a white dwarf," said Dr. Michael Jura, of the University of California at Los Angeles (UCLA).

White dwarfs are essentially the glowing embers of stars that were once like our Sun. Sun-like stars spend most of their lives producing energy by fusing hydrogen atoms into "heavier" helium atoms. Our Sun is currently doing this.

Once the Sun-like star runs out of hydrogen, helium atoms will fuse to produce other heavier elements like carbon, which will eventually sink to the star's core. Meanwhile, the heat released during this helium fusion is so strong that the will star expand and vaporize all dust, rocks and planets that orbit nearby. At this stage, the star is called a "red giant." Ultimately, the red giant will shed its external layers, exposing a dense, hot core about the size of Earth, known as a "white dwarf."

Closely orbiting planets, asteroids, and dust are not expected to survive the red-giant phase of a Sun-like star's life, so astronomers were shocked to find so much dust around the white dwarf GD 362. According to Jura, GD 362 has been a white dwarf for approximately 900 million years -- so surrounding dust should have already been destroyed. He also notes that astronomers were surprised to find chemical elements heavier than hydrogen and helium in GD 362's atmosphere, because these elements should have already sunk to the star's core. When an abundance of heavy elements were first found in GD 362's atmosphere in 2004, scientists were not sure where they came from.

An explanation came in 2005, when two teams of astronomers independently found evidence for dust orbiting GD 362. Both groups argued that the elements in the atmosphere came from orbiting dust particles that rained onto star, and was vaporized by the white dwarf's intense heat. However, astronomers did not know where the dust came from.

Some astronomers predicted that the dust circled the star similar to the way rings of debris orbit Saturn. They believed that the ring of dust around GD 362 came from a large asteroid that had wandered too close to the star, and was shredded by the white dwarf's gravity. Meanwhile, others suspected that dust grains floated into the system from outer space and got pulled into GD 362's atmosphere.

According to Jura, new observations from Spitzer provide direct evidence for the first scenario. He notes that the silicates (sand-like dust grains) in asteroids are very different from the silicates randomly floating around the universe. Using Spitzer's infrared spectrograph instrument, Jura's team determined that the silicates in GD 362's atmosphere resembled the sand-like grains found in asteroids.

"If this dust was floating in from the interstellar medium [or outer space] and falling onto the star, then we would see a trail of dust leading beyond this star system -- the dust disk shouldn't end. In the Spitzer observations, we see that the dust is confined to a region close to the star," said Jura.

Jura's paper on this topic was has been accepted by the Astronomical Journal. Other authors of this work include Dr. Jay Farihi, of the Gemini Observatory, Hawaii; and Drs. Ben Zuckerman and Eric Becklin, also of UCLA. Becklin led the Gemini North observations that first discovered dust in GD 362's atmosphere.