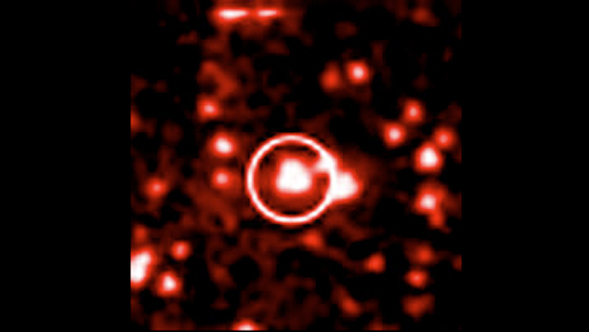 This question has stumped astronomers for decades. However, thanks to NASA's infrared eyes in the sky -- the Spitzer Space Telescope -- scientists may be one-step closer to solving this mystery.

"Before Spitzer, people didn't know about the infrared properties of quasars [or supermassive black holes] in the very early Universe. With Spitzer, we have detected infrared light from 13 quasars that formed within the Universe's first billion years," says graduate student Linhua Jiang, of the University of Arizona, Tucson.

Jiang recently authored a paper on Spitzer's observation of 13 distant quasars, each formed approximately 13 billion years ago. His paper was published in the November 2006 issue of Astronomical Journal.

In the infrared, astronomers can tell if a ring of dust is shrouding a particular quasar. Using Spitzer, Jiang discovered dust around 11 quasars in his sample, and determined that they share similar infrared properties to quasars that formed relatively recently.

According to Jiang, previous comparisons of distant and nearby quasars at X-ray and ultraviolet light also show similarities. In X-ray light astronomers can tell if a particular black hole is actively "gobbling up" cosmic debris.

"What Spitzer provides is a snapshot into one stage of a quasar's development," says Fan. "We know that quasars played a very important role in the development of galaxies, we are just not quite sure if they have changed over time. Spitzer is giving us some insights into this mystery."

"It is really quite impressive that an 85 cm telescope can see some of the most distant objects in the Universe without difficulty," Fan adds.