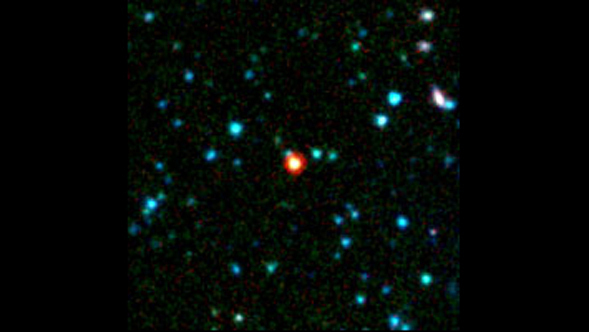 Scientists have long suspected that when galaxies collide, the supermassive black holes that reside within them gorge on a magnificent "buffet" of dust, gas, and stars. The cosmic feast is provided by violent episodes of star formation triggered in the great galactic clash. Most telescopes cannot detect these feasting black holes because dense clouds of dust and gas kicked up in the galactic collision shroud the objects from view.

However, at some point astronomers suspect that these celestial gluttons do get "full." Once this happens, scientists believe that the black holes let out an enormous belch of energy, strong enough to destroy much of its obscuring surrounding material. Some supermassive black hole belches may even destroy enough material to stop star formation in its host galaxy.

According to Dr. Maria del Carmen Polletta of the University of California at San Diego, in La Jolla, Calif., the recently identified supermassive black holes are heavily cloaked in dense dust clouds, and may be on the verge of such a cosmic burp. Polletta is the lead author of a paper on the topic. Her research was published in the May 2006 issue of Astrophysical Journal.

"Black holes always release a lot of energy as they accrete [or gobble up] matter," she says.

As matter falls into a black hole, energy is emitted. The more a black hole eats, the more energy is released. Astronomers suspect that at some point black holes will emit so much energy that the surrounding dust will be blown away or destroyed. Scientists measure this emitted energy in "luminosity." Polletta notes that the most luminous black hole in her study is about three billion times more massive than our Sun, and can gobble up about 68 solar masses of material per year, or more than the mass of one Sun per week.

"The dust surrounding an obscured black hole can complicate calculations of luminosity because dust actually absorbs some of the emitted energy and reradiates it in the infrared," says Polletta.

Using Spitzer's infrared eyes, Polletta and her team were able to measure the amount of energy being absorbed by dust, and thus accurately predict the black hole's luminosity. With NASA's Chandra X-ray Observatory, team members were also able to discern the amount of dust surrounding the object.

"The luminosity of the sources in my research are so high that dust should not survive," says Polletta. This is why she suspects that the black holes in her study are about to belch.

Although this type of phenomena has been predicted in astronomical models, Polletta is careful to note that there is still a lot that astronomers don't know about character of heavily obscured black holes.

"Black holes that are this heavily obscured and with this luminosity are very difficult to find and have not been extensively studied," says Polletta. "The belch of a black hole has never been verified with observations, so the explosion may not happen."

"The role that supermassive black holes play in the development of a galaxy is still unclear, there are still a lot of missing pieces. What we are seeing here is a very specific moment in the life of a black hole," she adds. "According to astronomical models, black holes at this luminosity should destroy their surrounding material pretty soon."

According to Polletta, who is a member of the SWIRE team, out of the millions of supermassive black holes detected by SWIRE, the objects in her study are the most luminous. She adds that her sources are among the most dust-obscured black holes ever studied.