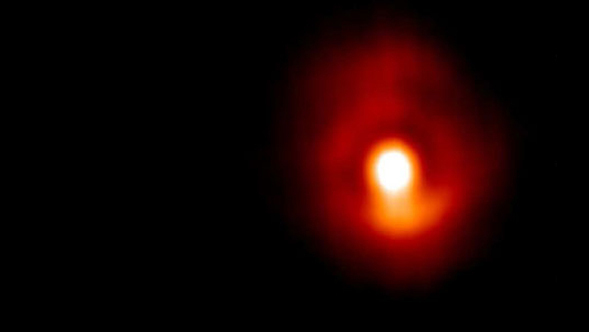 While the star has fascinated astronomers worldwide ever since, the source of the star's sudden outburst remains a mystery. Determined scientists remain hopeful they will learn more about the nature this stellar eruption by pointing a variety of telescopes at V838 Mon and its surrounding environment.

In one observation, NASA's Spitzer Space Telescope discovered an infrared light echo around V838 Mon. This is only the second infrared light echo ever to be resolved, and its detection has helped astronomers gain some valuable insights into the star's "personality."

An infrared light echo occurs when light waves blasted away from an erupting star heats up clumps of surrounding dust, and causes them to glow in the infrared. Visually, the light echo resembles growing ripples in a pond. As light propagates outward over time, more of the star's surrounding environment is illuminated.

By observing the infrared light echo around V838 Mon, astronomers were able to obtain a three-dimensional view of its surrounding dust cloud. Using this unique perspective, they set a lower limit on how much dust was surrounding the star.

"Initially we didn't realize that we could resolve an infrared light echo around this source. The fact that we did is a testament to Spitzer's superb sensitivity," said Dr. Kate Su, of the University of Arizona, Tuscon, Ariz. Su is one of the authors on a paper describing Spitzer's observations of V838 Mon. The paper has been accepted for publication in Astrophysical Journal Letters.

Prior to the Spitzer observations, some scientists pegged V838 Mon as a volatile star that has erupted frequently throughout its lifetime, spewing dust and other material into its surrounding environment with each violent outburst. They argued that the 2002 eruption was most likely one of these evolutionary, or developmental, outbursts that are part of the star's "growing pains."

However, by comparing the mass of the material illuminated in the infrared echo to the mass of the star, Su and her colleagues found that all the dust surrounding V838 Mon couldn't have come from the star. Thus, the 2002 outburst was most likely an anomaly, and the star is probably a lot more docile that previously believed.

"There is just too much material," said Dr. Karl Misselt, also of the University of Arizona and another author on the paper. "From previous studies we know that stars do lose some material as they evolve, or develop. However, only a very massive star -- more than 100 times the size of our Sun -- can lose that much material as part of its evolution, and this star isn't that massive."

Team members are continuing to use Spitzer data to study dust formation around V838 Mon. The star is located approximately 20,000 light-years away in the constellation Monoceros.