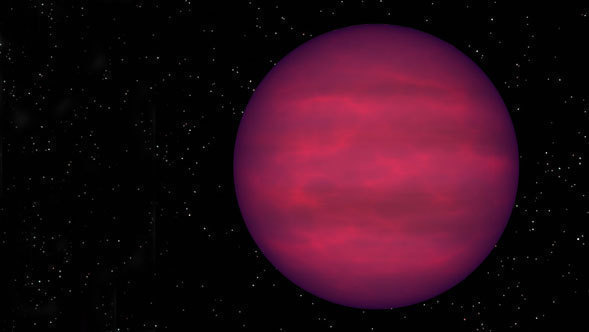 According to Dr. Daniel Stern of NASA's Jet Propulsion Laboratory, who led the group that authored a paper on these discoveries, the newly found quasar is the sixth most distant ever found.

In the same survey, using data from Spitzer and the Kitt Peak National Observatory, Stern and his team also found an extremely cold star called a T-type brown dwarf. Currently, less than 100 T-type brown dwarfs are known and the first was discovered only in the past decade. Many astronomers refer to brown dwarfs as "failed stars" because these puny orbs never acquired enough mass to visibly "light up," or ignite nuclear fusion in their cores. The T-type brown dwarf is the puniest and coldest class of failed stars. Although visible-light telescopes have difficulty seeing these faint objects, Spitzer's sensitive infrared eyes are ideally suited to detect what little heat they give off.

Even though the quasar is 100 quintillion (i.e., 100 million trillion, or a 1 with 20 zeros after it) times more luminous than the brown dwarf, Stern notes that both sources look almost identical to Spitzer because the quasar is extremely far away. To astronomers, the dim T-type brown dwarf, at a distance of approximately 100 light-years, is considered relatively close by in our own Milky Way Galaxy.

"It's really amazing that in 60 hours, Spitzer shallowly surveyed an area of sky spanning 40 full moons and detected some of the dimmest and some of the most distant, luminous sources in the Universe," said Stern.

"A crucial aspect of our survey has been deep, ground-based images obtained by our stalwart colleagues in Arizona, observing the same patch of sky in light that is bluer than Spitzer sees," he adds. "They spent more than 200 nights obtaining their data."

Follow-up observations on some of the sources detected by Stern were conducted with the Multi-Aperture Red Spectrometer (MARS) instrument on the National Science Foundation's Mayall 4-meter telescope at Kitt Peak, near Tucson, Arizona. The swath of sky observed by Stern's team is part of a large area in the constellation Bo?tes that was mapped to great depth with the Mayall telescope by the National Optical Astronomy Observatory (NOAO) Deep Wide-Field Survey.

"The job now is to find either the coldest star or the most distant quasar. Or, even better, both," said Dr. Peter Eisenhardt, also of NASA's Jet Propulsion Laboratory, a co-author on the paper.

Eisenhardt is Project Scientist for NASA's Wide-field Infrared Survey Explorer, a satellite that is expected to launch towards the end of the decade and will survey the entire sky in infrared light. Eisenhardt believes that the discoveries made by Spitzer, in a small patch of sky illustrate the scientific promise of the future mission's full-sky infrared survey.