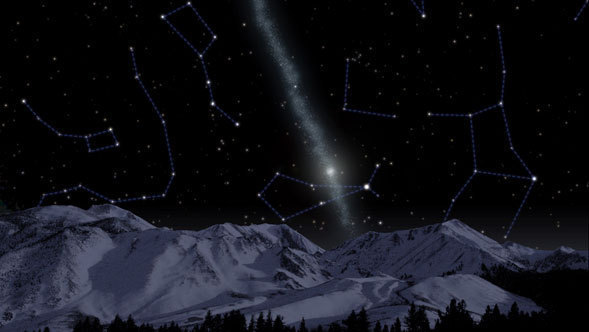 The California Institute of Technology announced today (March 15) that a team of astronomers, led by Carl Grillmair of the Spitzer Science Center, has discovered a narrow stream of stars extending at least 45 degrees across the northern sky.

The stream is about 76,000 light-years distant from Earth and forms a giant arc over the disk of the Milky Way galaxy. It begins just south of the bowl of the Big Dipper and continues in an almost straight line to a point about 12 degrees east of the bright star Arcturus in the constellation Bootes. The stream emanates from a cluster of about 50,000 stars known as NGC 5466.

The newly discovered stream extends both ahead and behind NGC 5466 in its orbit around the galaxy. This is due to a process called tidal stripping, which results when the force of the Milky Way's gravity is markedly different from one side of the cluster to the other. This tends to stretch the cluster, which is normally almost spherical, along a line pointing towards the galactic center.