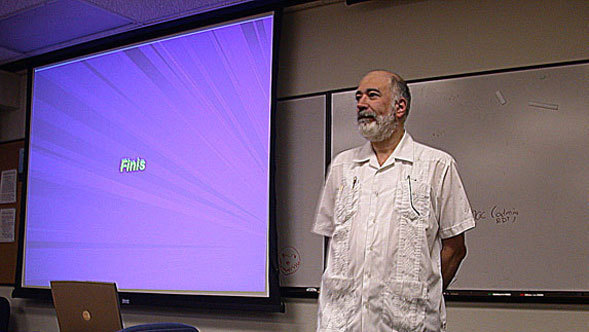 Dr. Edward Tedesco may not play a musical instrument and has yet to release an album, but that does not mean he isn't a "rock star."

Tedesco is an astronomical rock star, earning international recognition for his groundbreaking work on the study of asteroids, or "space rocks." He even has an asteroid named after him.

Tedesco came to the Spitzer Science Center (SSC) as part of the Visiting Scientist Program from January 9-20, 2006. In between talks and presentations on the challenges for infrared telescopes to correctly measure the size of very small asteroids, he talked with staff members at "Bagel Tuesday" (the SSC's casual weekly "water cooler" meeting).

The idea for the visiting scientist program came about randomly when Dr. John Stauffer, Head of Science at the SSC, was brainstorming for ways to use Spitzer's Enhanced Science Fund.

"I wanted to use the money in a way that would benefit everyone working at the SSC, not just some people," said Stauffer.

According to Spitzer Scientists and Visiting Scientist Committee members Drs. Luisa Rebull and Seppo Laine, once the program was established, an e-mail was circulated to SSC staff soliciting nominations of scientists to invite. After all of the nominations were collected, the committee sifted through the names and selected astronomers whose areas of expertise would benefit all SSC astronomers, from solar system scientists to extragalactic enthusiasts, alike.

"By bringing distinguished scientists to the SSC, we hope to inspire local scientists to pursue research ideas and techniques that they previously wouldn't have imagined," said Laine.

Although Tedesco's specialty is in observing asteroids, Bhattacharya notes that his work benefits all astronomers because these rocks appear in almost everyone's data.

"Astronomers have nicknamed asteroids 'space vermin' because they often appear in images taken to look at other astronomical objects. Ed's research will help many scientists better understand asteroids and their orbits, which will help them interpret their data," she adds.

Tedesco is a Research Associate Professor at the University of New Hampshire, Durham, N.H., and one of approximately 10 scientists to visit the SSC in 2006.