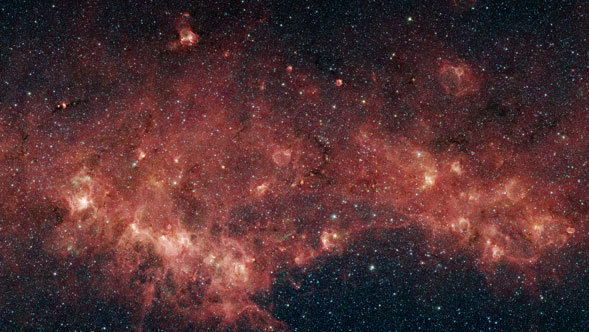 How many stars are currently forming in our Milky Way galaxy? How many of them are high-mass stars? These are questions a team of international astronomers will attempt to answer in a 417-hour galactic survey called MIPSGAL. Data from the project's first 200 hours of observations were just recently released to the astronomical community.

In all, the project will use Spitzer to map approximately 220 degrees of the sky (equivalent to 440 full moons lined up side-by-side). It requires the largest single use of Spitzer's Multiband Imaging Photometer (MIPS) ever.

Because the project demands such large consecutive amounts of time, its allotment was broken into two separate observations. The first 200 hours began on September 27, 2005 and took fourteen solid days to complete. During this time, the team surveyed the part of the galactic plane, commonly known as the Milky Way, that is visible from Earth's northern hemisphere at night. Spitzer will observe the galactic plane as seen from the southern hemisphere in April 2006.

The MIPS instrument is vital to astronomers studying star formation because it represents Spitzer's far-infrared eye. Because dust heats up and shines in the far-infrared as material condenses to form a star, MIPS allows astronomers to detect embryonic stars before they can otherwise be seen.

The survey data will provide a snapshot of the youngest and largest stars forming in the Milky Way. High-mass stars are ten or more times larger than our own sun and their presence "drives the evolution of the Galaxy," says Dr. Sean Carey, MIPSGAL's principal investigator.

The project is named MIPSGAL because it uses MIPS to scan the Galactic plane. It was inspired by data collected in MIPS' first year of observation and the Galactic Legacy Infrared Mid-Plane Survey Extraordinaire (GLIMPSE) Legacy project, which surveys roughly the same area of the Milky Way's disk with Spitzer's Infrared Array Camera (IRAC), using shorter infrared wavelengths.

In reviewing MIPS and GLIMPSE data, Carey says MIPSGAL became "an obvious project to do."

"Writing this proposal was like writing a good book. The science potential was so compelling, it practically wrote itself," said Carey. "By combining this new data with the information collected by GLIMPSE, astronomers will have a more precise knowledge of star formation in our own galaxy."