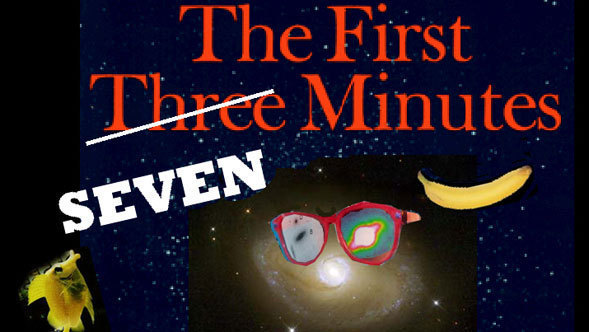 It's another sunny Tuesday morning in Southern California and a handful of infrared scientists have flocked to the roof of the Spitzer Science Center for this week's "First Seven Minutes" meeting.

Sound boring? Well, don't be fooled. Smart infrared scientists don't usually like to leave work for an excruciatingly boring meeting (although they don't always have a choice). They've turned up at this meeting because it is actually fun! It runs like The Gong Show or Showtime at the Apollo, with an astronomical twist.

Every week a volunteer scientist has seven minutes to present a dramatic new discovery in the field of astronomy, and then the audience votes. If they give the presentation a thumbs up, the presenter wins a Belgian chocolate bar, thumbs down a banana.

"If you think about it even the loser wins because bananas are healthier than chocolate," says "The First Seven Minutes" creator and Spitzer Scientist Dr. Philip Appleton.

On this particular week, Spitzer Scientist Dr. Seppo Laine has volunteered to present a physics paper suggesting that astronomy's elusive dark matter does not need to exist to explain the rotation speeds of galaxies.

He begins by introducing himself and continues to present the highlights of the paper.

"Seven minutes up! It's time to vote," says Appleton.

"What do we think of the presentation?"

The audience unanimously flashes thumbs up.

"What do we think of the result?"

Again, the vote is unanimous, but this time it's thumbs down.

Luckily for Laine, only the presentation vote counts. He wins the chocolate bar.

On second thought, perhaps he isn't so lucky. Appleton later admits that the presenter rarely gets thumbs down. Astronomers are just too darn friendly.

"We've been doing this for three years and in the few cases where astronomers did give thumbs down, they meant the paper not the presentation. So we began taking two votes: presentation and paper," said Appleton.

The creator also confesses that the meeting is just a fun version of a common practice among scientists, where volunteers pick and casually present noteworthy science papers to their peers over a coffee break. The forum keeps busy scientists up to date on the happenings in their field and allows them to discuss the new findings from different perspectives of expertise.

When he was an associate professor at Iowa State University, Appleton recalls that scientists used to get only five minutes to present in a traditional setting. However, he felt that this was too short and did not leave enough time for questions. The second time around, he decided to change the presentation time to seven minutes.

"The maximum attention span for most people is seven minutes and we wanted to take advantage of that," says Appleton. "Ten minutes is too long, so the rule is any member of the audience can walk out after seven minutes."

The title of the meeting is a parody of Nobel Laureate Dr. Steven Weinberg's book The First Three Minutes, which discusses the first three minutes of the universe's existence.

Citing his British sense of humor for the kooky twist on the traditional forum, Appleton notes that the other goal of the meeting is to get people to laugh.

"In a field where there is a lot of stress, getting people to smile is a good thing."