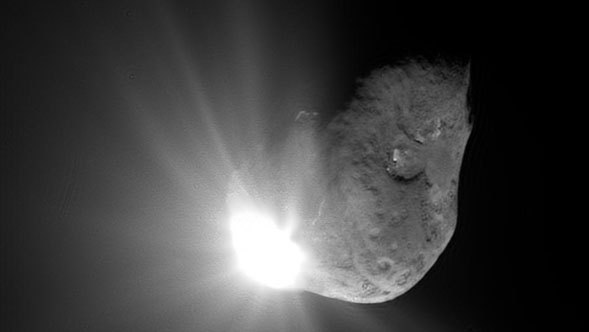 Before it was discovered that gravity pulled comets across the sky, many peoples and cultures perceived these cosmic objects as bad omens or "big bullies." They were often blamed for plagues and wars on Earth. In movies this image of the bully comet is perpetuated as they are often portrayed as hard chunks of ice barreling towards Earth to aid in the extinction of humanity. Recently, with a little help from NASA'S Deep Impact Mission and the Spitzer Space Telescope, comet Tempel 1 was finally able to reveal the soft and fluffy side of comets, showing that they are more like cotton candy than massive bully boulders.

Because comets spend most of their lifetime in the cold edges of the Solar System and formed approximately 4.6 billion years ago along with the system's planets, astronomers believe that comets are actually "cosmic refrigerators," which preserve the ingredients of the early Solar System in pristine condition. While spacecrafts and telescopes have extensively studied the outer shell of comets in the past, astronomers agree that this is not a good indicator of the ingredients of the early Solar System because frequent encounters with the Sun's heat actually change the composition of the comet's surface.

On July 4, 2005, NASA's Deep Impact Mission attempted to learn more about the ingredients that created out Solar System by unleashing an 820 pound impactor spacecraft in the path of comet Tempel 1, and creating a football field-sized crater on the face of the comet. From the sidelines, Spitzer and the Deep Impact flyby craft tried to identify exactly what molecules were being released.

In some ways astronomers found what they were looking for: water ice, carbon dioxide ice, and silicates (sand). Surprisingly, they also found materials like clay and carbonates (material found in seashells) that require liquid water to form. However, the impactor never hit solid ice.

This discovery has led many scientists to ask new questions about what the early Solar System looked like.

Could the comets have formed near the Sun where temperatures are warmer and liquid water is present? If so, how did they get to the edge of the solar system? Could there have been two massive Jupiter sized planets involved in a "cosmic smack down" which threw comets to the edge of the Solar System? Scientists are pondering all of these possibilities and many more as more Spitzer and Deep Impact data continues to be analyzed.

The ingredients of the cotton candy comet, or Tempel 1, were announced in September 2005 at the 37th annual meeting of the Division of Planetary Sciences in Cambridge, United Kingdom.