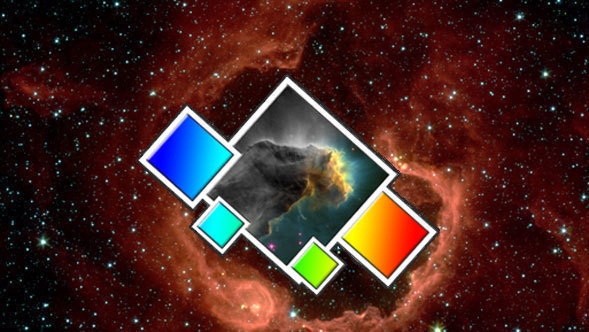 Since its launch nearly two years ago, NASA's Spitzer Space Telescope has taken the public on a journey to the darkest and dustiest places of the cosmos. Its stunning infrared images continue to dazzle us with new views of hidden nebulas and whirling galaxies. Some people might think those images magically arrive from space, while astronomers have a better understanding of the complex process involved in creating Spitzer pictures.

Now, a new tool developed in collaboration with the Spitzer Science Center is allowing anybody with Adobe? Photoshop? to try a hand at this technical wizardry. The second version of this tool makes its grand debut today (August 8). "With the FITS Liberator, making images from a half-billion dollar telescope is about as easy as working with photos from a high-end digital camera," said Robert Hurt of the Spitzer Science Center, a member of the software's development team.

Since the release of the first version in July 2004, the FITS Liberator has become the industry standard for astronomical image processing at NASA, the European Southern Observatory, the European Space Agency, and many other facilities throughout the world. Version 2 of this release adds powerful new tools for enhancing faint details in images and for retaining important technical and descriptive information within the final image.

The FITS Liberator 2.0 plug-in for Photoshop is freely available for download at:
http://www.spacetelescope.org/projects/fits_liberator/