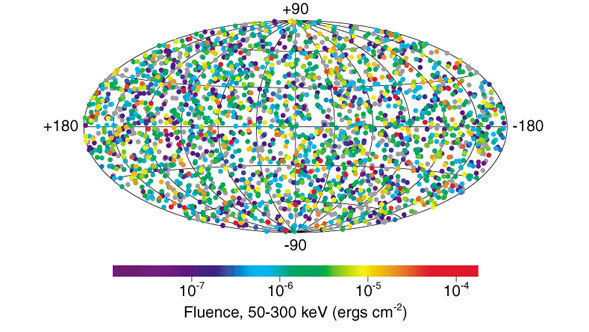 The Spitzer Space Telescope is currently executing its first-ever High Impact Target of Opportunity (ToO) observation in order to catch a look at the aftermath of one of the most violent explosions in the universe. The ToO program was designed as a means to interrupt Spitzer's normal observation schedule in the case of an extraordinary event.

On May 24th, 2005, the Swift satellite recorded the largest gamma-ray burst since its mission began. A major scientific goal of the Swift mission is to catch these mysterious bursts of gamma rays (extremely high-energy light) in the act of exploding, and quickly relay the location of the burst to other telescopes around the world, as well as up in space. Once alerted, other observatories scan the sky around the area of the gamma-ray burst, looking for any signs of an afterglow from the explosion. Once identified, more detailed observations of the counterpart to the gamma-ray burst begin.

In order for Spitzer to study the object so quickly after the burst was identified, the Spitzer team did some extraordinary planning. It began at 7:30pm PDT on Tuesday, May 24 with a phone call from Dr. Peter Garnavich, the ToO principle investigator, to Dr. Nancy Silbermann, Spitzer's Observer Support Team lead.

"I have a special phone number, used just to activate ToOs. When it rang, I knew it was going to be exciting!" Silbermann said. "One minute after talking with the observer, I was on the phone alerting folks across the mission, and we got to work on making this happen."

This ToO observation requires a very different mode of operations for Spitzer. Normally, each of Spitzer's three instruments operates one-at-a-time, for campaigns lasting 1-2 weeks, following a schedule built three-to-five weeks in advance. However, to catch the gamma-ray burst counterpart before it fades away, Spitzer's instruments begin observing as soon as possible after the burst is localized, and rotate on-and-off six times over two days, each observing the gamma-ray burst counterpart in turn.

"We completely rebuilt Spitzer's observing schedule to accommodate this, and we did it overnight (literally)" noted Steve Barba, Spitzer's Observatory Planning and Scheduling team lead. "It was a complete team effort."

The Spitzer Space Telescope joins other observatories in looking for the afterglow of this recent gamma-ray burst, as well as any other evidence that would shed some light on these mysterious, monstrous explosions. The first Spitzer observation is 10:46pm PDT, Thursday, May 26 with Spitzer's infrared array camera (IRAC). At 11:33pm, the infrared spectrograph (IRS), takes over, followed by the multiband imaging photometer (MIPS) at 11:24am on the 27th, and back to IRAC at 2:08pm. Finally on Saturday, May 28, IRAC observes the burst counterpart again at 4:14am PDT, and then Spitzer switches one last time to MIPS at 7:28am. Then the original schedule is resumed, taking observations with the IRS.

"It's a whirlwind!" said Silbermann. "But it's well worth it! Having data from across the infrared part of the spectrum will hopefully shed some light on what is going on with these massive explosions."

For years now, scientists have been puzzled by these sudden, transient bursts of gamma-rays that can come at any time, from any direction on the sky. The first gamma-ray bursts were discovered by accident; in the late 1960's a series of satellites were launched to detect nuclear weapons tests around the world. The Vela Satellites were looking for gamma rays, which can be created by nuclear explosions, specifically hydrogen bombs. Gamma-rays are very rare in nature, because in order to give off this ultra-high-energy light, an object has to have a temperature of over a billion degrees. As the Vela satellites scanned the Earth for these high-temperature explosions, they detected about 2-3 gamma ray "pops" a day that couldn't have come from nuclear tests. These gamma rays were coming from the wrong direction, from above the satellites, up in space.

These gamma-ray events remained an interesting -- if somewhat obscure -- field of astronomical study, until 1999, when two orbiting observatories, the Compton Gamma Ray Observatory and Beppo-Sax, both recorded a strong gamma-ray burst. An automated array of small telescopes in New Mexico called ROTSE-1 was able to observe the burster just 25 seconds after it had been detected. Within four hours the 200-inch telescope at Mount Palomar had picked it up, followed by the largest optical telescope in the world, the Keck in Hawaii. This time, something other than just a burst of gamma-rays was seen. For just a few seconds, there was a visible glow strong enough to be seen with a good pair of binoculars. And for a day afterward, a dim afterglow remained that the giant telescopes were able to follow and analyze. With this new data, astronomers were able to take a spectrum of the glowing region, and measure its redshift.

The implications of the redshift measurement were astounding. The measurement suggested that the afterglow was located in a galaxy ten billion light-years away, almost at the edge of the known universe. How bright is an object that you can physically see with binoculars from ten billion light-years away? In astronomical terms, whatever produced the gamma-ray burst shone with the light of 1,000,000,000,000,000,000,000 Suns, or the combined light of ten billion galaxies. In a real sense, that object out-shone the rest of the observable universe at the point of explosion, and produced conditions unseen since the Big Bang. Theories suggest the only event that could pack that much punch is the creation of a massive black hole, either by two neutron stars colliding, or the collapse of a very massive, rapidly rotating star (recently termed a collapsar).