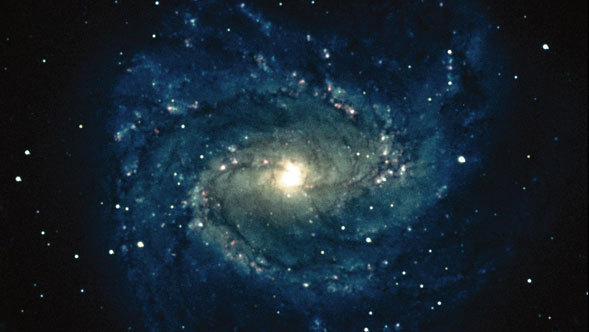 Principal Investigator Robert Rubin submitted his proposal to study star formation in the spiral arms of M83 during the first cycle of observation requests. The galaxy is a barred spiral, similar to our own, and can be found in the constellation Hydra about 12 million light years away.

Spitzer's 10,000 observations (also known as AORs, or Astronomical Observation Requests) range from stars to brown dwarfs to interstellar clouds of gas and dust to galaxies and have returned to Earth with excellent quality. About 98 percent of the observations have been labeled "nominal," meaning the data has no significant problems and has met the set qualifications in order to be released.

"Most of the data Spitzer transmits is very good," Data Quality Analysis (DQA) Research Scientist Vince Mannings said. "There have been relatively few instances where observations from a particular AOR are missing, overexposed or affected by latent images from bright objects."

Mannings heads the team responsible for the DQA of the transmitted images. They are the first to examine the data once it has been processed into a viewable format. The DQA team rates each AOR, which is composed of several thousand exposures from Spitzer, and assigns it a quality label.

"The fact that we have reached this milestone observation number of 10,000 so early into the mission is a reflection of how few problems Spitzer has experienced so far and a testament to the number of people that worked insanely hard prior to its flight," System Engineer and Test Lead Dr. Lee Bennett said.

However, some variables, such as solar flare storms, are beyond the control of the scientists and engineers. These astronomical occurrences help account for the small percentage of images that don't meet quality standards.

"If we detect a problem with the observations for a particular AOR, we contact the Observer Support Team to ensure that the scientist will receive usable data during another transmission," Mannings said.

The Observer Support Team is headed by Dr. Nancy Silbermann, and works as a liaison between the Spitzer Science Center and the scientists and astronomers who have submitted the AORs.

"We serve as an advocate and police force at the same time," Silbermann said. "Our job is to make sure that everyone is abiding by the rules and guidelines that Spitzer sets forth while also trying to ensure the scientists are happy with their data observations."

The deadline for the next set of general observation proposals was Feb. 12. Silbermann says the center received about 700 proposals. The Time Allocation Committee, a council composed of science peers, will review these in April and make selections based on their scientific justification to fill the 5400 available observation hours.

The scheduling of AORs is a dynamic process and is done five weeks in advance according to the object's visibility and its position and timing relative to when Spitzer is scheduled to operate. Because Spitzer isn't serviceable in deep space and its instruments can only be cooled and functional for about five years, every decision is made on the basis of efficiency. Instrument support teams are actively calibrating Spitzer's instruments to increase the telescope's observational effectiveness.

Mannings equates the process to tuning a car.

"We are basically looking for ways to ensure that Spitzer operates longer," he said.

Of the 10,000 AORs, many are available in the archive database for the public to view on the Spitzer Science Center homepage under "Science Archive Update."

These science AORs are giving insight into objects that were previously blocked from our sight by large dark clouds of dust and debris. Visible light has wavelengths shorter than 0.7 micron while infrared wavelengths are detected with Spitzer from 3.5 microns to 170 microns and primarily traces the emission from heat or thermal energy. Spitzer picks up the infrared emissions where Hubble left off in the visible light emissions, essentially filling in the black voids.

This will help astronomers and scientists detect other systems similar to our own solar system and study the formation and other processes fueling development.