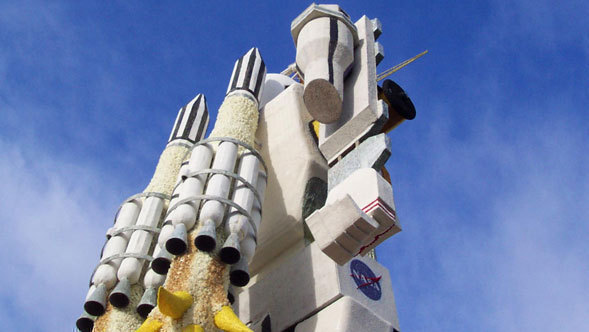 The float was designed and built by Pasadena-based Phoenix Decorating Company and its award-winning designer, Raul Rodriguez. A joint JPL/Caltech float committee solicited design concepts from the JPL community earlier this year and then worked with the builder to select the final concept. Construction began in June. Caltech funded the float. Caltech manages JPL for NASA.

The Explorer was decorated with blue and purple statice, carnation petals, silverleaf, eucalyptus leaf, onion seed, sesame seed, and crushed white rice. The launch rockets had flames that combined fresh whole flowers and countless individually applied flower petals. The base of the float was an elaborate flower show, featuring red, yellow, pink, and white roses; yellow, lavender, and white orchids; and a colorful selection of gladiolas. The Explorer's head turned from side to side, and his helmet featured daytime strobe lights that flashed all along the flight path down the parade route. The Explorer's body could lean forward about 15 feet as the rockets fired carbon dioxide in preparation for takeoff.