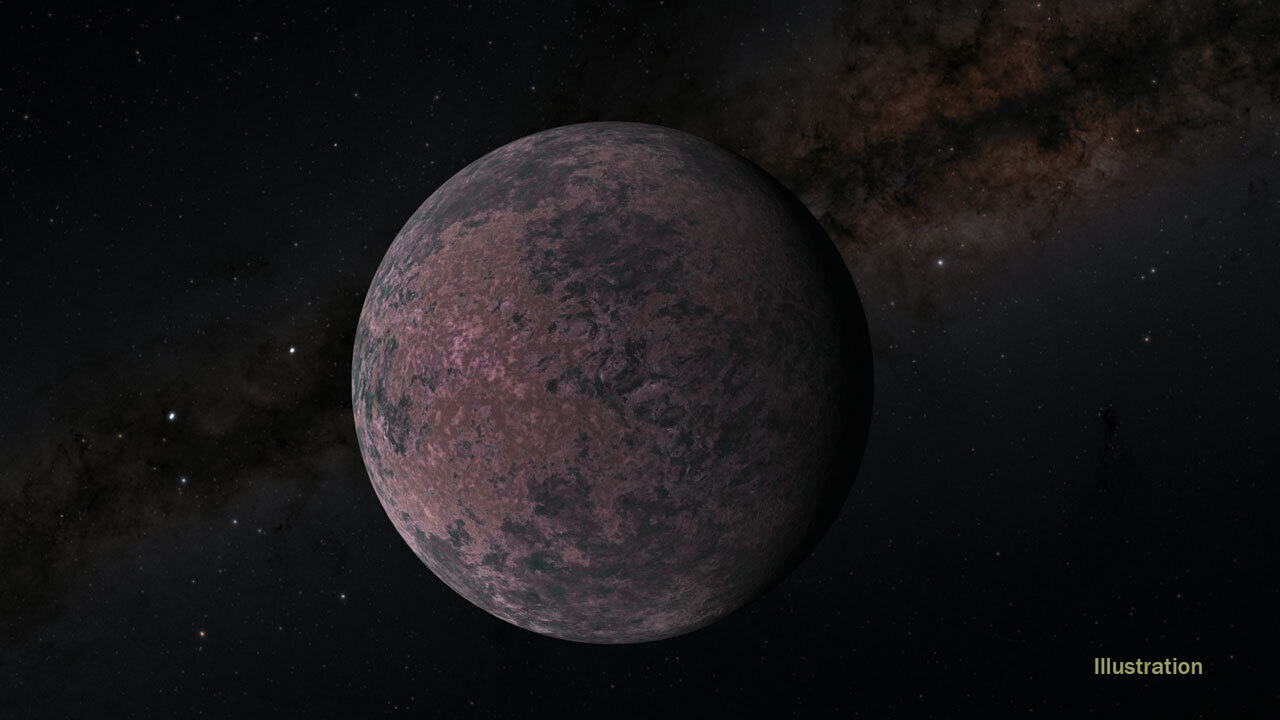 Illustration of the terrestrial super-Earth GJ 1252 b, which lies approximately 65 light-years from Earth. Credit: NASA/JPL-Caltech

The discovery: GJ 1252 b, a rocky, terrestrial "super-Earth" discovered in 2020, has been given a closer look and astronomers have found that the exoplanet could have a very minimal atmosphere or possibly no atmosphere at all.

The planet, which orbits an M-type star, is "the smallest exoplanet yet for which we have such tight constraints on its atmosphere,” said lead author Ian Crossfield, an astronomer and assistant professor at the University of Kansas.

Key facts: Astronomers often discover and study exoplanets by observing how much light the planets block out as they pass in front of their host stars, a technique known as the "transit method." GJ 1252 b, an exoplanet about 65 light-years away with a radius 1.18 times larger than Earth, was discovered with this method by NASA's Transiting Exoplanet Survey Satellite (TESS) in 2020. Astronomers in this new study observed the exoplanet with the Spitzer Space Telescope before it retired and were able to get a closer look at the planet and its atmosphere.

With Spitzer, the team detected a secondary eclipse, which occurs when a planet passes behind a star and the planet's light, which comes from its own infrared radiation (or heat), as well as light reflected from the star, is blocked.

Details: Astronomers searching for signs of life in the cosmos focus on a number of different details in exoplanets. Many of these details serve as a comparison between the exoplanet and Earth, as Earth remains the only planet where we have confirmed the presence of life.

GJ 1252 b isn’t much larger than Earth, but it is much hotter as it is closer to its star and, as astronomers have found in this study, is lacking much of an atmosphere.

“We’re just beginning to learn how often, and under what circumstances, rocky planets can keep their atmospheres,” said astronomer and study co-author Laura Kreidberg, the director of the Atmospheric Physics of Exoplanets (APEx Department at the Max Planck Institute for Astronomy. “This measurement is an indication that for the hottest planets, it’s unlikely that thick atmospheres typically survive.”

To determine what the exoplanet's atmosphere (if there is one) could be like, astronomers measured infrared radiation from GJ 1252 b as its light was obscured during a secondary eclipse. These observations revealed the planet’s scorching day-side temperature, which is estimated to reach as high as 2,242 degrees Fahrenheit (1228 degrees Celsius). In fact, GJ 1252 b is so hot that gold, silver, and copper would all melt on the planet.

Given its extreme temperatures and low surface pressure, the astronomers on this team have predicted that GJ 1252 b likely has no atmosphere at all. This is currently the smallest exoplanet for which scientists have such a clear idea of its atmosphere.

Fun facts: GJ 1252b is an exoplanet that was first detected with TESS and then investigated more thoroughly with Spitzer before the telescope's mission ended in 2020. With further exploration with the James Webb Space Telescope (JWST), the team could put even tighter constraints on this planet's atmosphere, an exciting possibility.

“At the time, Spitzer was the only facility in the known universe that could make these sorts of measurements. Now, Spitzer has been turned off, but JWST is there and at these wavelengths it's much more sensitive than Spitzer was. So, what we did with difficulty with Spitzer we can now start to do easily and for larger numbers of rocky planets with JWST,” Crossfield said.

“JWST observations in the infrared have the potential to reveal the surface properties of hot, rocky planets like this. Different types of rock have different spectral signatures, so we could potentially learn what type of rock GJ 1252b is made of,” Kreidberg added.

Studying GJ 1252 b further with JWST poses an exciting possibility for scientists, as it would be interesting to confirm an atmosphere on such a small and hot exoplanet as it would also be fascinating to explore the composition of a planet like this with no atmosphere at all.