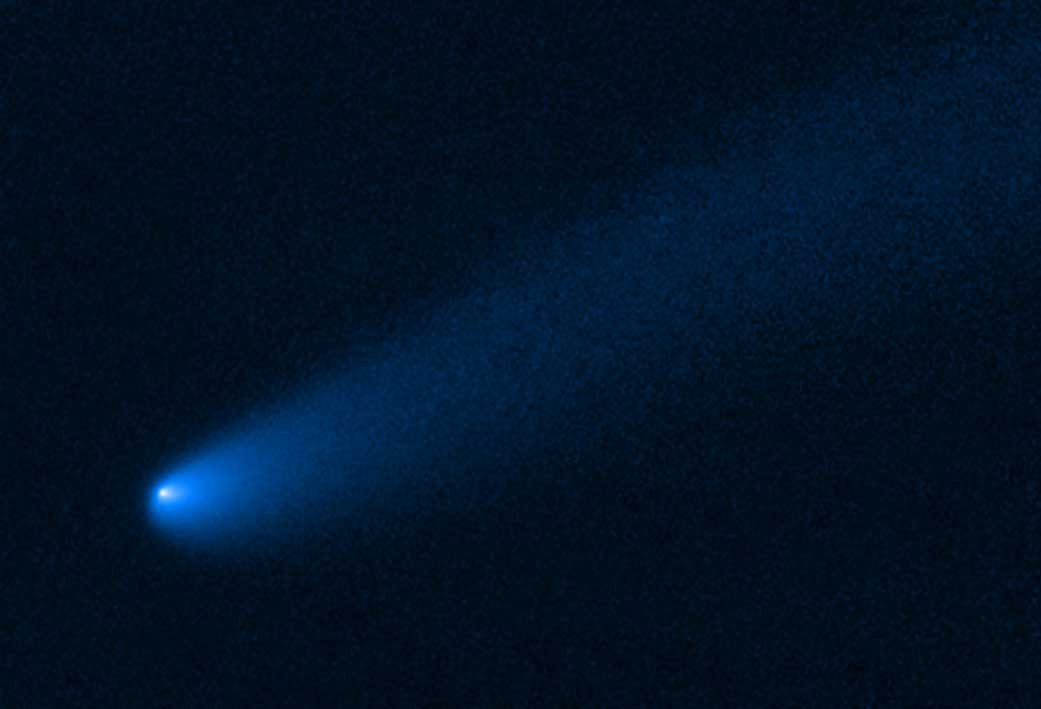 After traveling several billion miles toward the Sun, a wayward young comet-like object orbiting among the giant planets has found a temporary parking place along the way. The object has settled near a family of captured ancient asteroids, called Trojans, that are orbiting the Sun alongside Jupiter. This is the first time a comet-like object has been spotted near the Trojan population.

The unexpected visitor belongs to a class of icy bodies found in space between Jupiter and Neptune. Called Centaurs, they become active for the first time when heated as they approach the Sun, and dynamically transition into becoming more comet-like.

Visible-light snapshots by NASA’s Hubble Space Telescope reveal that the vagabond object shows signs of comet activity, such as a tail, outgassing in the form of jets, and an enshrouding coma of dust and gas. Earlier observations by NASA’s Spitzer Space Telescope gave clues to the composition of the comet-like object and the gasses driving its activity.

“Only Hubble could detect active comet-like features this far away at such high detail, and the images clearly show these features, such as a roughly 400,000-mile-long broad tail and high-resolution features near the nucleus due to a coma and jets,” said lead Hubble researcher Bryce Bolin of Caltech in Pasadena, California.

Describing the Centaur’s capture as a rare event, Bolin added, “The visitor had to have come into the orbit of Jupiter at just the right trajectory to have this kind of configuration that gives it the appearance of sharing its orbit with the planet. We’re investigating how it was captured by Jupiter and landed among the Trojans. But we think it could be related to the fact that it had a somewhat close encounter with Jupiter.”

The team’s paper appears in Feb. 11 issue of The Astronomical Journal.

The nomadic object was discovered in early June 2019 by the University of Hawaii’s Asteroid Terrestrial-impact Last Alert System (ATLAS) telescopes located on the extinct volcanoes, one on Mauna Kea and one on Haleakala. Japanese amateur astronomer Seiichi Yoshida tipped off the Hubble team to possible comet activity. The astronomers then scanned archival data from the Zwicky Transient Facility, a wide-field survey conducted at Palomar Observatory in California, and realized that the object was clearly active in images from April 2019.

They followed up with observations from the Apache Point Observatory in New Mexico, which also hinted at the activity. The team observed the comet using Spitzer just days before the observatory’s retirement in January 2020, and identified gas and dust around the comet nucleus. These observations convinced the team to use Hubble to take a closer look. Aided by Hubble’s sharp vision, the researchers identified the tail, coma structure, the size of the dust particles, and their ejection velocity. These images helped them confirm that the features are due to relatively new comet-like activity.

Although LD2’s location is surprising, Bolin wonders whether this pit stop could be a common pull-off for some sunward-bound comets. “This could be part of the pathway from our solar system through the Jupiter Trojans to the inner solar system,” he said. 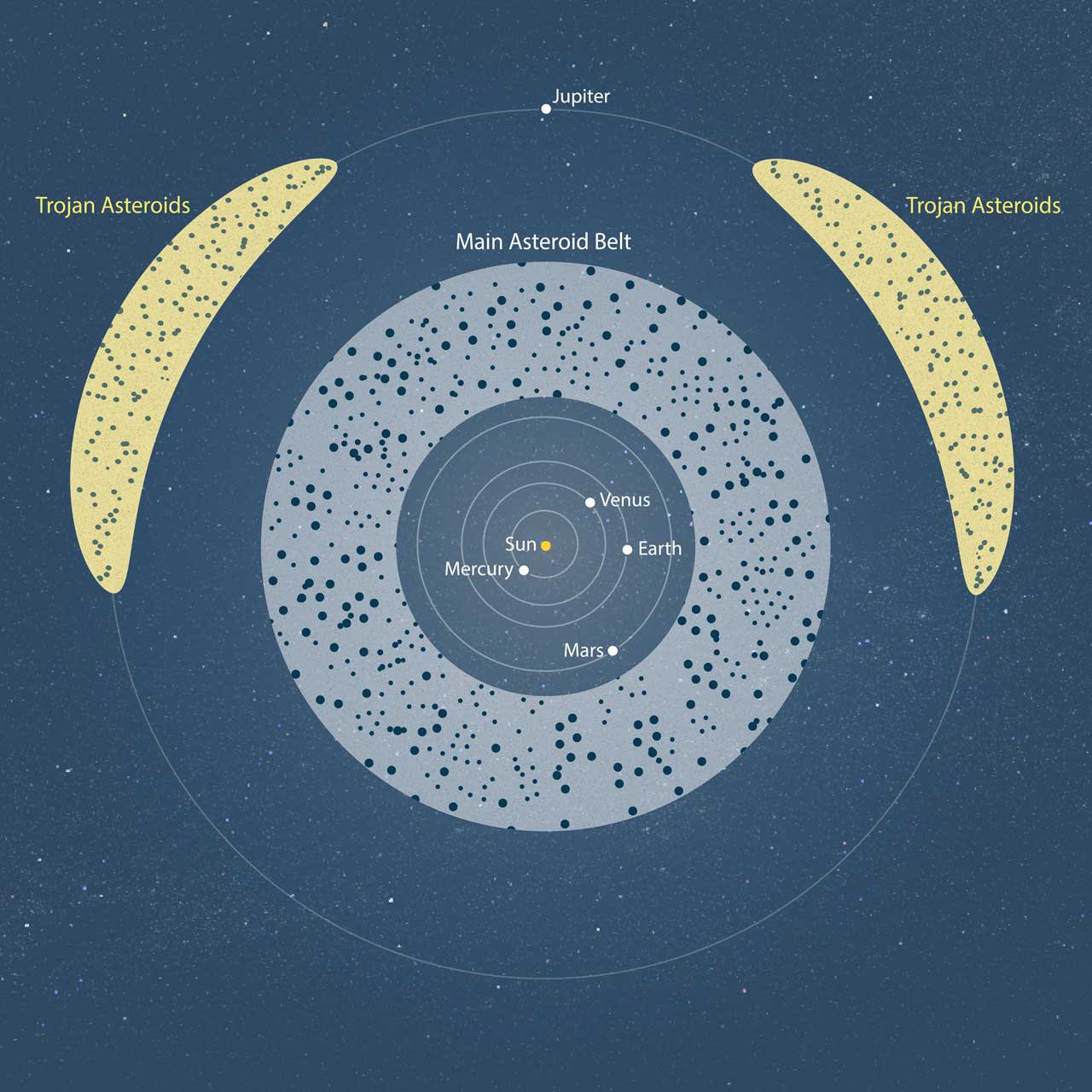 The main asteroid belt lies between Mars and Jupiter, whereas Trojan asteroids both lead and follow Jupiter. Scientists now know that asteroids in the early solar system (4.6 billion years ago) adhered together and eventually formed the inner planets, including Earth. Credit: NASA/ESA/J. Olmsted/STScI

The unexpected guest probably will not stay among the asteroids for very long. Computer simulations show that it will have another close encounter with Jupiter in about another two years. The hefty planet will boot the comet from the system, and it will continue its journey to the inner solar system.

“The cool thing is that you’re actually catching Jupiter flinging this object around and changing its orbital behavior and bringing it into the inner system,” said team member Carey Lisse of the Johns Hopkins University Applied Physics Laboratory (APL) in Laurel, Maryland. “Jupiter controls what’s going on with comets once they get into the inner system by altering their orbits.”

The icy interloper is most likely one of the latest members of the so-called “bucket brigade” of comets to get kicked out of its frigid home in the Kuiper Belt and into the giant planet region through interactions with another Kuiper Belt object. Located beyond Neptune’s orbit, the Kuiper Belt is a haven of icy, leftover debris from our planets’ construction 4.6 billion years ago, containing millions of objects, and occasionally these objects have near misses or collisions that drastically alter their orbits from the Kuiper Belt inward into the giant planet region.

The bucket brigade of icy relics endure a bumpy ride during their journey sunward. They bounce gravitationally from one outer planet to the next in a game of celestial pinball before reaching the inner solar system, warming up as they come closer to the Sun. The researchers say the objects spend as much or even more time around the giant planets, which are gravitationally pulling on them – about 5 million years – than they do crossing into the inner system where we live.

“Inner-system, ‘short-period’ comets break up about once a century,” Lisse explained. “So, in order to maintain the number of local comets we see today, we think the bucket brigade has to deliver a new short-period comet about once every 100 years.”

Seeing outgassing activity on a comet 465 million miles away from the Sun (where the intensity of sunlight is 1/25th as strong as on Earth) surprised the researchers. “We were intrigued to see that the comet had just started to become active for the first time so far away from the Sun at distances where water ice is barely starting to sublimate,” said Bolin.

Water remains frozen on a comet until it reaches about 200 million miles from the Sun, where heat from sunlight converts water ice to gas that escapes from the nucleus in the form of jets. So the activity signals that the tail might not be made of water. In fact, observations by Spitzer indicated the presence of carbon monoxide and carbon dioxide gas, which could be driving the creation of the tail and jets seen on the Jupiter-orbiting comet. These volatiles do not need much sunlight to heat their frozen form and convert them to gas.

Once the comet gets kicked out of Jupiter’s orbit and continues its journey, it may meet up with the giant planet again. “Short-period comets like LD2 meet their fate by being thrown into the Sun and totally disintegrating, hitting a planet, or venturing too close to Jupiter once again and getting thrown out of the solar system, which is the usual fate,” Lisse said. “Simulations show that in about 500,000 years, there’s a 90% probability that this object will be ejected from the solar system and become an interstellar comet.”

The Hubble Space Telescope is a project of international cooperation between NASA and ESA (European Space Agency). NASA’s Goddard Space Flight Center in Greenbelt, Maryland, manages the telescope. The Space Telescope Science Institute (STScI) in Baltimore, Maryland, conducts Hubble science operations. STScI is operated for NASA by the Association of Universities for Research in Astronomy, in Washington, D.C. NASA’s Jet Propulsion Laboratory, a division of Caltech in Pasadena, California, managed the Spitzer mission for NASA’s Science Mission Directorate in Washington, D.C. Science operations were conducted at the Spitzer Science Center at IPAC at Caltech. Spitzer’s entire science catalogue is available via the Spitzer data archive, housed at the Infrared Science Archive at IPAC. Spacecraft operations were based at Lockheed Martin Space in Littleton, Colorado.