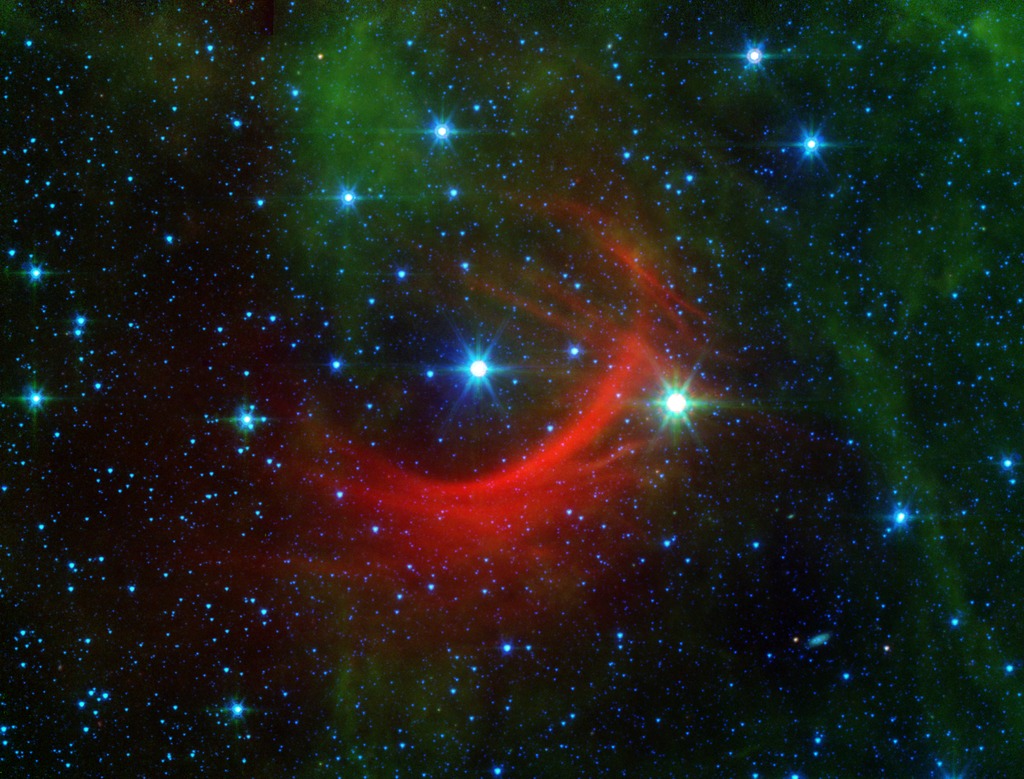 Roguish runaway stars can have a big impact on their surroundings as they plunge through the Milky Way galaxy. Their high-speed encounters shock the galaxy, creating arcs, as seen in this newly released image from NASAs Spitzer Space Telescope.

In this case, the speedster star is known as Kappa Cassiopeiae, or HD 2905 to astronomers. It is a massive, hot supergiant. But what really makes the star stand out in this image is the surrounding, streaky red glow of material in its path. Such structures are called bow shocks, and they can often be seen in front of the fastest, most massive stars in the galaxy.

Bow shocks form where the magnetic fields and wind of particles flowing off a star collide with the diffuse, and usually invisible, gas and dust that fill the space between stars. How these shocks light up tells astronomers about the conditions around the star and in space. Slow-moving stars like our sun have bow shocks that are nearly invisible at all wavelengths of light, but fast stars like Kappa Cassiopeiae create shocks that can be seen by Spitzers infrared detectors.

Incredibly, this shock is created about 4 light-years ahead of Kappa Cassiopeiae, showing what a sizable impact this star has on its surroundings. (This is about the same distance that we are from Proxima Centauri, the nearest star beyond the sun.)

The Kappa Cassiopeiae bow shock shows up as a vividly red color. The faint green features in this image result from carbon molecules, called polycyclic aromatic hydrocarbons, in dust clouds along the line of sight that are illuminated by starlight.

Delicate red filaments run through this infrared nebula, crossing the bow shock. Some astronomers have suggested these filaments may be tracing out features of the magnetic field that runs throughout our galaxy. Since magnetic fields are completely invisible themselves, we rely on chance encounters like this to reveal a little of their structure as they interact with the surrounding dust and gas.

Kappa Cassiopeiae is visible to the naked eye in the Cassiopeia constellation (but its bow shock only shows up in infrared light.)

For this Spitzer image, infrared light at wavelengths of 3.6 and 4.5 microns is rendered in blue, 8.0 microns in green, and 24 microns in red.