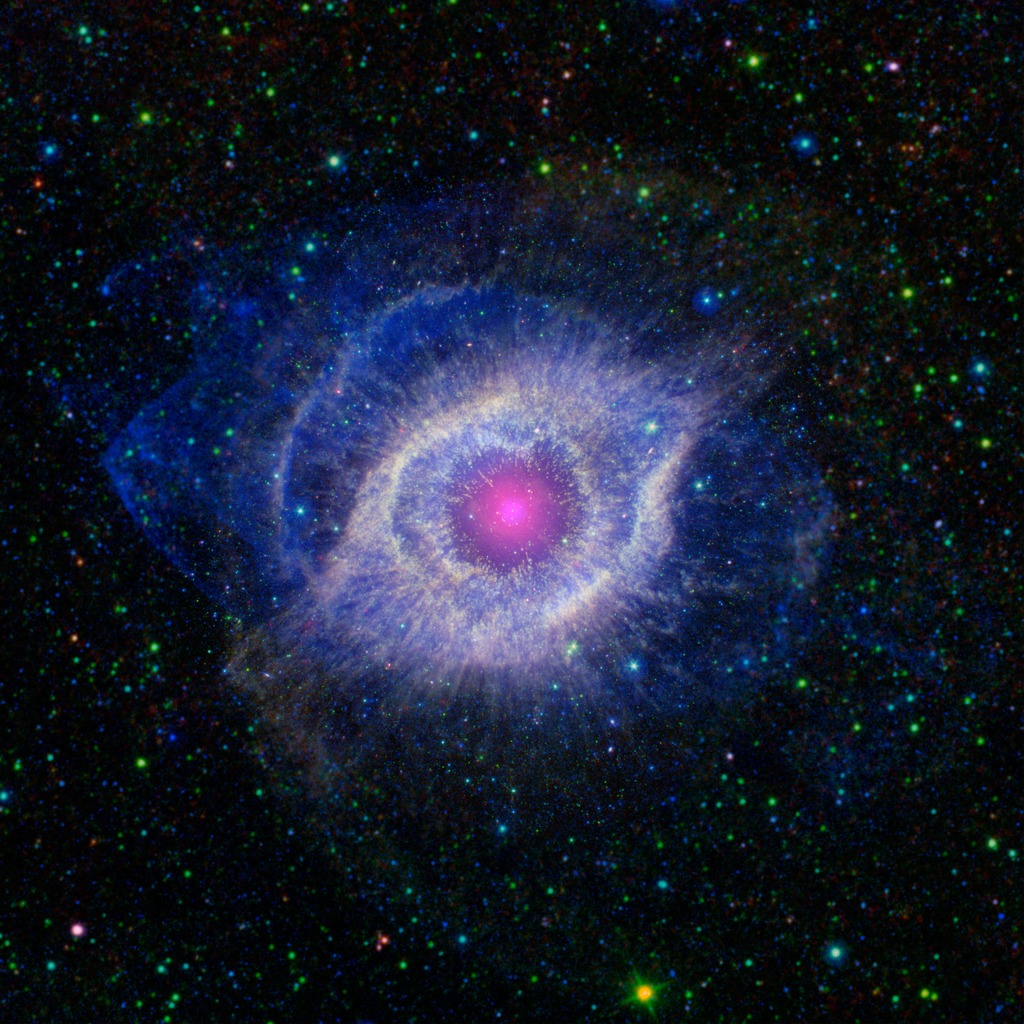 A dying star is throwing a cosmic tantrum in this combined image from NASA's Spitzer Space Telescope and the Galaxy Evolution Explorer (GALEX), which NASA has lent to the California Institute of Technology in Pasadena. In death, the star's dusty outer layers are unraveling into space, glowing from the intense ultraviolet radiation being pumped out by the hot stellar core.

This object, called the Helix nebula, lies 650 light-years away, in the constellation of Aquarius. Also known by the catalog number NGC 7293, it is a typical example of a class of objects called planetary nebulae. Discovered in the 18th century, these cosmic works of art were erroneously named for their resemblance to gas-giant planets.

Planetary nebulae are actually the remains of stars that once looked a lot like our sun. These stars spend most of their lives turning hydrogen into helium in massive runaway nuclear fusion reactions in their cores. In fact, this process of fusion provides all the light and heat that we get from our sun. Our sun will blossom into a planetary nebula when it dies in about five billion years.

When the hydrogen fuel for the fusion reaction runs out, the star turns to helium for a fuel source, burning it into an even heavier mix of carbon, nitrogen and oxygen. Eventually, the helium will also be exhausted, and the star dies, puffing off its outer gaseous layers and leaving behind the tiny, hot, dense core, called a white dwarf. The white dwarf is about the size of Earth, but has a mass very close to that of the original star; in fact, a teaspoon of a white dwarf would weigh as much as a few elephants!

The glow from planetary nebulae is particularly intriguing as it appears surprisingly similar across a broad swath of the spectrum, from ultraviolet to infrared. The Helix remains recognizable at any of these wavelengths, but the combination shown here highlights some subtle differences.

The intense ultraviolet radiation from the white dwarf heats up the expelled layers of gas, which shine brightly in the infrared. GALEX has picked out the ultraviolet light pouring out of this system, shown throughout the nebula in blue, while Spitzer has snagged the detailed infrared signature of the dust and gas in yellow A portion of the extended field beyond the nebula, which was not observed by Spitzer, is from NASA's all-sky Wide-field Infrared Survey Explorer (WISE). The white dwarf star itself is a tiny white pinprick right at the center of the nebula.

The brighter purple circle in the very center is the combined ultraviolet and infrared glow of a dusty disk circling the white dwarf (the disk itself is too small to be resolved). This dust was most likely kicked up by comets that survived the death of their star.

Before the star died, its comets, and possibly planets, would have orbited the star in an orderly fashion. When the star ran out of hydrogen to burn, and blew off its outer layers, the icy bodies and outer planets would have been tossed about and into each other, kicking up an ongoing cosmic dust storm. Any inner planets in the system would have burned up or been swallowed as their dying star expanded.