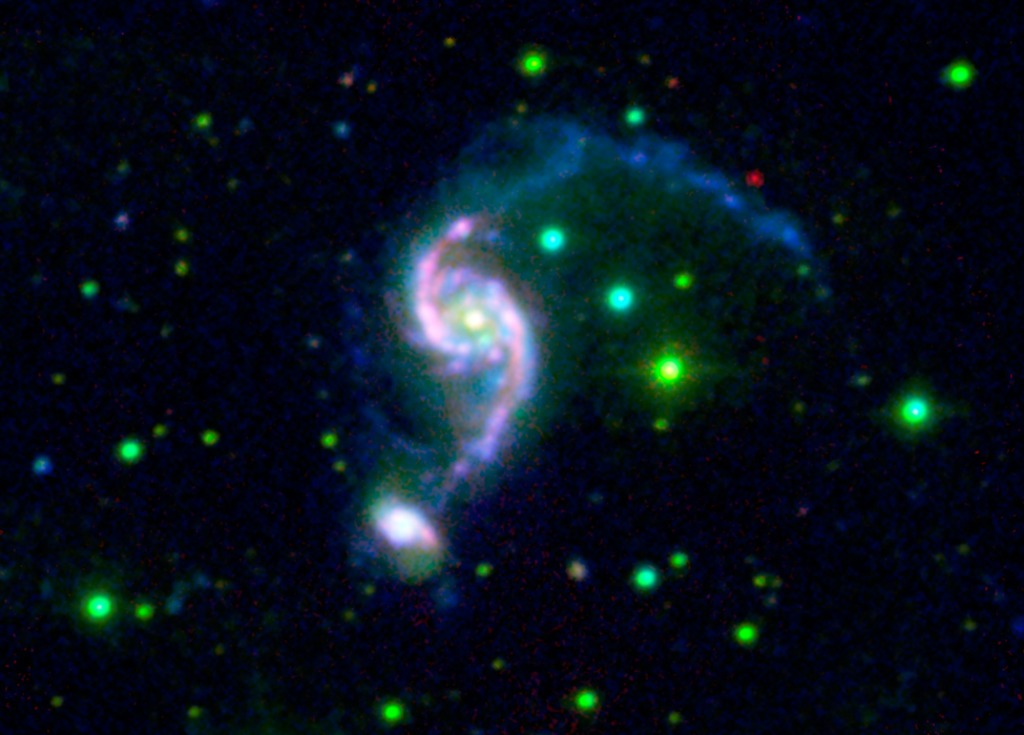 A pair of interacting galaxies might be experiencing the galactic equivalent of a mid-life crisis. For some reason, the pair, called Arp 82, didn't make their stars early on as is typical of most galaxies. Instead, they got a second wind later in life -- about 2 billion years ago -- and started pumping out waves of new stars as if they were young again.

Arp 82 is an interacting pair of galaxies with a strong bridge and a long tail. NGC 2535 is the big galaxy and NGC 2536 is its smaller companion. The disk of the main galaxy looks like an eye, with a bright "pupil" in the center and oval-shaped "eyelids." Dramatic "beads on a string" features are visible as chains of evenly spaced star-formation complexes along the eyelids. These are presumably the result of large-scale gaseous shocks from a grazing encounter. The colors of this galaxy indicate that the observed stars are young to intermediate in age, around 2 million to 2 billion years old, much less than the age of the universe (13.7 billion years).

The puzzle is: why didn't Arp 82 form many stars earlier, like most galaxies of that mass range? Scientifically, it is an oddball and provides a relatively nearby lab for studying the age of intermediate-mass galaxies.

This picture is a composite captured by Spitzer's infrared array camera with light at wavelength 8 microns shown in red, NASA's Galaxy Evolution Explorer combined 1530 and 2310 Angstroms shown in blue, and the Southeastern Association for Research in Astronomy Observatory light at 6940 Angstroms shown in green.