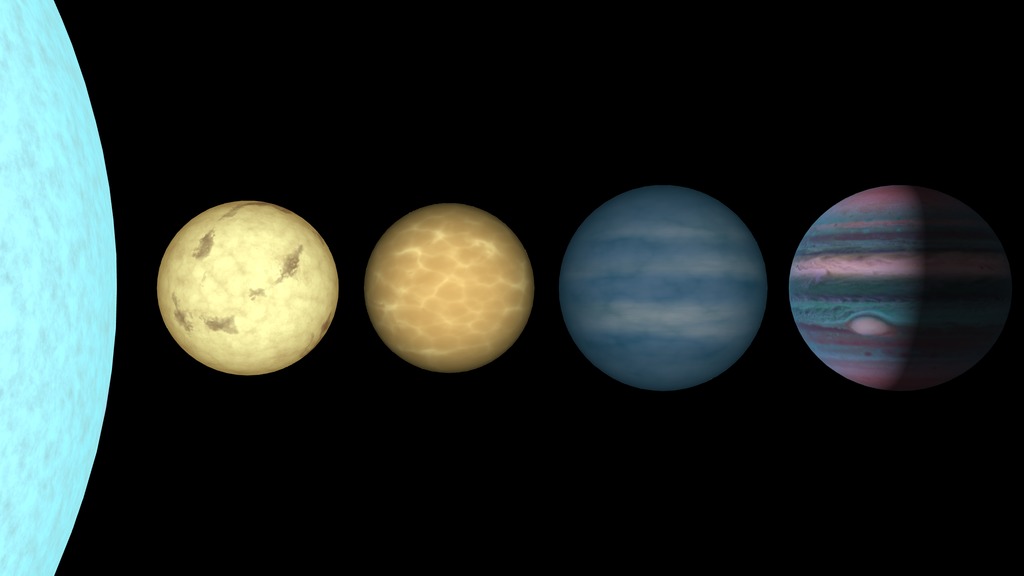 This figure shows an artist's rendition comparing brown dwarfs to stars and planets. All objects are plotted to the same scale. On the far left is the limb of the Sun. To its right is shown a very low mass star (a so-called "late-M dwarf"), a couple of brown dwarfs (a hotter "L dwarf" and a cooler "T dwarf"), and the planet Jupiter. These objects have masses ranging from 1050 times that of Jupiter (for the Sun) through 75, 65, 30, and 1 Jupiter mass for the late-M dwarf, L dwarf, T dwarf, and Jupiter, respectively. The colors of the brown dwarfs are chosen to match an age of 1 billion years. Despite the range in mass, all four of the low-mass objects are approximately the same size, ten times smaller than the diameter of the Sun. The infrared-light shows the same objects as they might appear to eyes sensitive to near-infrared light. Here the M and L dwarfs are slightly orange or red compared to the Sun, but the T dwarf is distinctly blue due to a lack of light in the "green" and "red" caused by absorption from methane. Methane is also abundant in the atmosphere of Jupiter and this, along with the clouds and bands of other complex molecules, gives it alternating patches of pink and blue.