We have launched the new Spitzer website! Send feedback to outreach@ipac.caltech.edu. Find the old website at http://legacy.spitzer.caltech.edu.
NASA
Jet Propulsion Laboratory
California Institute of Technology
Remembrance of Things Past 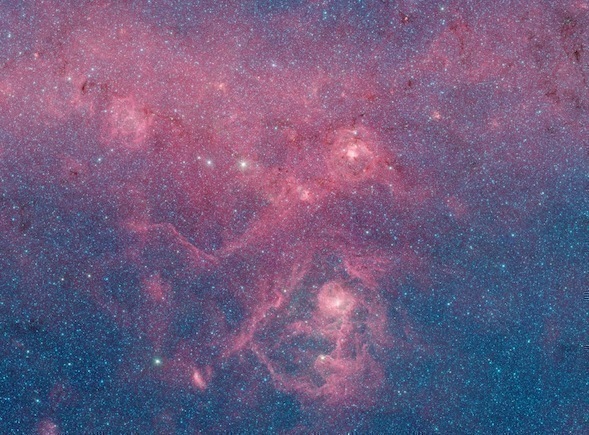 It was an exciting time. Since Spitzer launched on August 25, 2003 we’d been working 24x7, and I was coming to work at random times, working long hours. I remember that at almost any time of the day or night I would most likely find someone in my office at the Spitzer Science Center. For various reasons it was a place where people would go to take a break for a few moments and we called our larger gatherings “Cafe SIRTF.” Sometimes I’d know the people who were in my office, sometimes not. We had a lot of visitors coming from the instrument teams at the University of Arizona, Cornell and Harvard, and I was meeting some of them for the first time.

On December 1, 2003 everything had checked out with the telescope during the “in-orbit checkout” and “science validation” phases, and Spitzer was working flawlessly. The science mission began.

Now one wrinkle was that we hadn’t yet completed our data archive. This wasn’t necessarily a bad thing - it was the last system we needed for the telescope. We could still fly the observatory, we were getting lots of exciting data and beginning a voyage of scientific discovery that was far beyond what any of us could imagine at the time.

But we didn’t have a data archive.

The consequence was that we didn’t have an automated way for scientists to obtain their data. From December 2003 through May 2004, I had the task of being the “human Spitzer archive.” When the observations were processed and ready to be released, I manually moved the data from the processing environment, which is behind a firewall, out to an ftp-site that the scientists could access. This involved running a set of scripts to get and move the data, renaming the files so that they would be meaningful for a general user, and then emailing the principle investigator and technical contact for the program to let them know the data from their observations were available.

You have to remember that Spitzer was a time-sensitive mission; there was a finite amount of cryogen on-board and we were all motivated to get as much science from Spitzer as possible during the cold-mission phase. We believed it was important that scientists could begin the analysis of their data as quickly as possible.

So another thing I remember was that on December 25, 2003 I was in my office at Caltech during the morning and early afternoon, staging data. I did the same thing on January 1, 2004, after I returned from watching the Rose Parade on Colorado Boulevard in Pasadena. This was a routine that carried on for the next few months.

Somewhere in this time frame, I pulled and staged the first image from the GLIMPSE survey of our Milky Way galaxy. It was taken on December 23, 2003. I don’t remember when I staged it, but I’m guessing it was sometime in early January. At the time, I had no idea of what was to come.

Over the course of the next 10 years, Spitzer would go on to take another 2.5 million images of the Milky Way. In total it spent 4,142 hours (172 days) obtaining these observations. If you are an astronomer, you’ll appreciate the magnitude of these numbers. Imagine having your very own space telescope working for you, 24 hours a day, for over half a year. Imagine also making a panoramic picture, stitching together over two million individual photos.

Never before have we had such a complete, detailed and sensitive view of the galaxy in which we live. The image covers about three percent of our sky, but because it focuses on a band around Earth where the plane of the Milky Way lies, it shows more than half of all the galaxy's stars, and most of the active star formation.

Spitzer's infrared view reveals much more of the galaxy than can be seen in visible-light views. Whereas visible light is blocked by dust, infrared light from stars and other objects can travel through dust and be seen by Spitzer. When looking up at our night skies, we see stars that are only out to about 1,000 light-years away; the rest are hidden. In Spitzer's mosaic, light from stars throughout the galaxy -- which stretches 100,000 light-years across -- shines through.

In many ways, I think this is the iconic image from the entire Spitzer mission. In all likelihood, it won’t be surpassed by any current or planned telescope during my lifetime, nor the lifetimes of any readers of this blog. 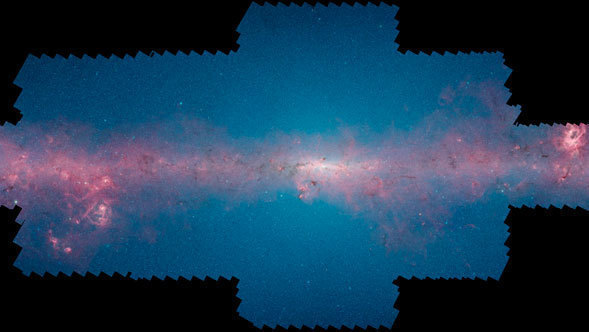 Become a Photojournalist of the Milky Way! 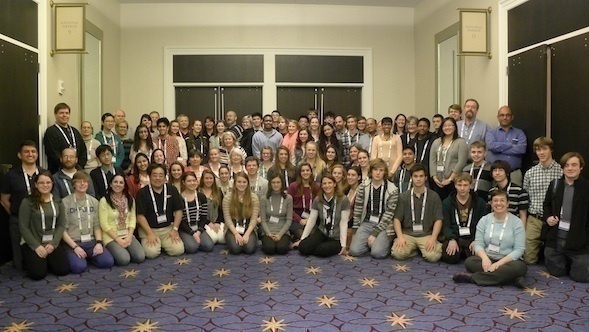 Discovering Our Universe from the Classroom