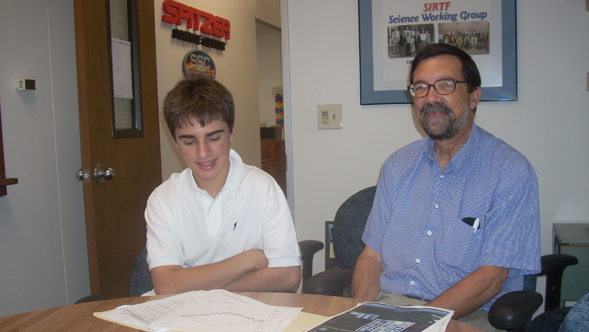 I have had the privilege of working on Spitzer since 1977 and have been Project Scientist since 1984, back in the day when we were known as SIRTF and intended to fly on the Space Shuttle. Thus many of the younger people in our extended family - nieces and nephews and their children, as well as my own children - have always identified me with this project, and vice versa.

Over the years, many of these relatives have put together junior high science fair posters about Spitzer, so I was not too surprised, but very pleased, when my sister's grandson Gray Putnam asked to do a high school science project on Spitzer data.  Gray started off as a high school freshman in a preschool science enrichment program at his high school in Larchmont, New York.  In the summer before his sophomore year and, most recently, before his junior year he came and spent a week with me and my wife, Edwenna, working at the Spitzer Science Center and visiting JPL.

Gray's experiences during his first summer at the SSC were greatly facilitated by the outstanding educational infrastructure built up by Luisa Rebull and others via the NITARP teacher education program.  In particular, the web-based  photometry program pioneered by Russ Laher allowed my colleague Varoujan Gorjian - another NITARP veteran - to show Gray very quickly how to do photometry on FITS images, and Gray practiced by measuring several of the compact galactic nuclei which Varoujan and I had observed  with Spitzer.  We also discussed the fundamentals of blackbody radiation and some of the physics of star formation.

Gray returned this summer with much greater computer skills, knowledge of EXCEL, and high school trigonometry in his tool belt.  Before his arrival, I had discussed with SSC scientist John Stauffer the possibility of putting Gray to work studying one of the 1000 or so variable stars which his YSOVAR team had identified in the Orion Molecular Cloud during 40 days of monitoring with Spitzer.  We set to work on the selected star, which is called OMC-2 IRS-1, using data from John's YSOVAR pipeline which Gray spot checked so that he had some understanding of where the data came from.

I should say that I had as much fun as Gray did in putting together a model to explain the variability of the star.  Like many of the YSOs [Young Stellar Objects] in the YSOVAR program, OMC-2 IRS-1 is embedded in a disk which may be home to a forming planetary system.  The infrared radiation which Spitzer sees from this system comes from the warm inner surface of this dusty disk.

After a few false starts [part of the learning process], Gray and I converged on a model in which the variability is due to periodic illumination of the portion of the surface that we see by a hot spot on the star; the light from the hot spot flashes across the disk like a lighthouse beam as the star rotates.  Gray completed an initial calculation of the "light curve" - brightness vs. time - of such a system while he was at the SSC, and the results look very promising.

During the remainder of this year, he will refine the model and obtain estimates of the size, temperature excess, and latitude of the star by comparing his calculations with the data provided by John Stauffer.  The hot spot may signal a point on the surface of the star at which material from the disk falls on to the stellar surface, perhaps funneled by the star's magnetic field.  I will continue to advise Gray through the magic of the Internet; his computational capability will be enhanced as he learns calculus and masters the use of Mathematica.  Later this year, Gray hopes to submit the finished project to a number of regional science fairs, while John and I might be able to incorporate Gray's work into a paper to be submitted for publication.

This has been a great experience for Gray and a great deal of fun for me.  I am delighted that the scope of the Spitzer project makes it possible to help students in this way, and Gray and I greatly appreciate the hospitality of the SSC and the help provided by the Spitzer scientists mentioned above.

There have been collateral benefits as well:  Gray's father, my nephew Jon Putnam, reports that in the backyard football games which Jon, Gray, and Gray's brothers Gideon and Noah play the boys take turns identifying their teams with various college football powers, most notably the University of Michigan, or perhaps the New York Jets.  These days, however, Gray is as likely to pick that noted football power, the California Institute of Technology, which is undefeated in football since the early 1990's.

An article about Gray's project appears in The Daily Larchmont - www.thedailylarchmont.com/news/science-elective-challenges-larchmont-junior 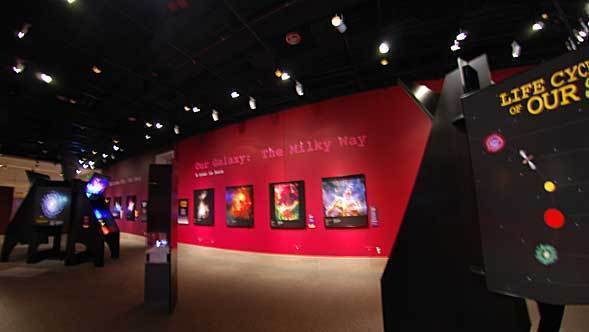 See Spitzer at the Smithsonian! 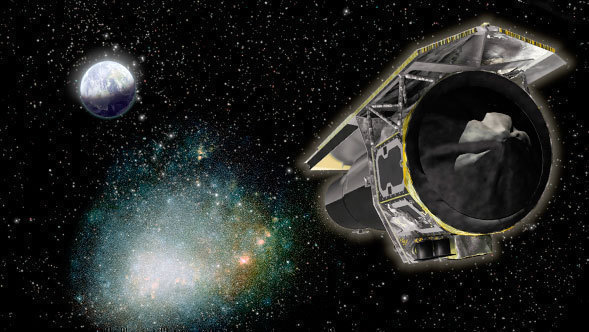