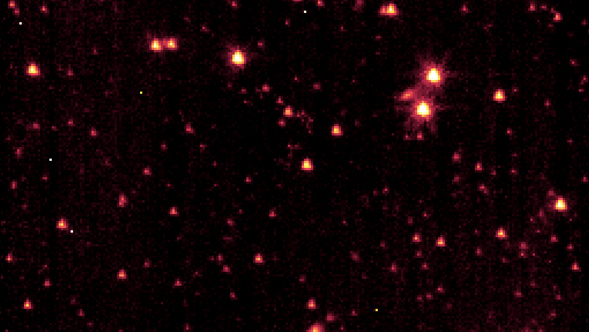 NASA's Space Infrared Telescope Facility has switched on two of its onboard instruments and captured some preliminary star-studded images. The space observatory was launched from Cape Canaveral, Fla., on August 25.

The images were taken as part of an operational test of the infrared array camera. It will take about a month to fully focus and fine-tune the telescope and cool it to optimal operating temperature, so these early images will not be as sharp or polished as future pictures.

"We're extremely pleased, because these first images have exceeded our expectations," said Dr. Michael Werner, the Space Infrared Telescope Facility project scientist at NASA's Jet Propulsion Laboratory, Pasadena, Calif. "We can't wait to see the images and spectra we'll get once the telescope is cooled down and instruments are working at full capacity."

The most striking image is available on the Internet at the following websites:

The telescope's dust cover was ejected on Aug. 29, and its aperture door opened on Aug. 30. The spacecraft is operating in normal mode, and all systems are operating nominally. The team is very pleased with the rapid progress of the observatory and all of its onboard systems, said Project Manager David Gallagher of JPL.

In addition to the infrared array camera, the multi-band imaging photometer instrument was also switched on for the first time in a successful engineering test. The spacecraft's pointing calibration and reference sensor detected light from a star cluster. The third instrument, the infrared spectrograph, will be turned on later this month.

These operations are part of the mission's two-month in-orbit checkout, which will be followed by a one-month science verification phase. After that, the science mission will begin a quest to study galaxies, stars and other celestial objects, and to look for possible planetary construction zones in dusty discs around other stars.

JPL, a division of the California Institute of Technology in Pasadena, manages the Space Infrared Telescope Facility for NASA's Office of Space Science, Washington, D.C. More information about the Space Infrared Telescope Facility is available at http://sirtf.caltech.edu/. For more information about NASA on the Internet, visit http://www.nasa.gov.